"There's not too many actual rules to this game of our's but one of the big ones is: if there is no corpse the guy's alive."
-Nick Fury 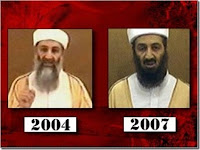 According to a Zogby poll, 19% of the small number of people asked believe Osama Bin Laden is actually still alive. This despite even al`Qaeda admitting he is a dead man. Why? Andrew Malcolm at the LA Times has a few thoughts:

This incredulity phenomenon is a curious creation of a high-speed global media so full of unverified and unverifiable information floating about, combined with a modern cynicism about political leaders masquerading as voter wisdom.

After so many lies and misleading claims by politicians over the decades since the Kennedy assassination and its conspiracy theories ("I am not a crook" "I did not have sex with that woman"), the safest way to look wise and experienced these days is to dismiss virtually any public official's statement as a talking point and/or lie.

The widespread arrival of television some 60 years ago and more recently online video has trained people to expect some kind of visual confirmation of virtually any news, either live or shortly after. Its absence almost surely spawns doubts.

I can add a few more reasons: the administration has released conflicting information and changed its story a dozen times or so in various ways. They dumped the body at sea and refuse to release photos, and apparently the live feed was cut off during the actual raid, even at the White House.

This LA Times writer can't help a dig at Nixon, but that's about as current as Eisenhower telling the world the US was not spying on Russia with planes to most voters today. The truth is, after decades of politicians being portrayed in the worst possible light in every single situation by their political enemies and the press delighting in digging up every single thing that embarrasses or humiliates them (at least, if they are Republicans), folks have gotten used to the idea that politicians lie, and lie a lot.

And as Malcolm notes, in the last ten years or so the internet has built up a cult of conspiracy theorists who reinforce each other and grow in strength and influence no matter how loony the idea is (truthers, for example). Conspiracies have been so built up in movies and modern entertainment (X-Files, Matrix, thousands of games, comics, books, and TV shows, etc) that people are more comfortable with the idea that something sinister is going on behind the scenes than the idea that they might be able to trust their leaders.

I don't blame people so much; politicians have been largely untrustworthy, and President Clinton took that to new depths of depravity and excess during his 2 terms as president, establishing a precedent. Before the Clinton administration there was never a movie that came out showing the US president as a killer or a scumbag. Several came out in the 90s and they keep coming out to this day.

The way this was handled was about the worst possible way to get people to believe what happened. Killed instead of captured (not that I oppose that, but it is harder for people to trust), buried at sea, no pictures or video released; the Obama administration is practically begging people to not believe them.

The reasons for this are fairly straight forward - if you are an academic leftist. They didn't want to parade the body of Bin Laden around because that would upset alternate cultures of non-white, non european minorities (although Arabs and Persians are white, they are treated non white by most leftists in this context). They didn't want to release pictures for the same reason. They don't want to release video because it violates the Nobel Prize winner image and makes the president seem more a cowboy than President Bush.

All of the things they've done can be attributed to either multiculturalism and the misguided belief that upsetting Muslims is why they are trying to kill us, or the power struggle of various factions in the Obama administration which lacks a leader to control and direct their efforts. Then there's the constant need to control and manipulate the narrative that the Obama team continually engages in, sometimes in self-destructive and contradictory ways.

Bin Laden is dead. Even his organization admits this. Terrorists around the world are trying to retaliate for the announcement of Osama's death. Whether he actually died on May 1st 2011 or not is another question but he's dead.

Its just too bad that we've gotten to a point in our culture where people tend not to believe anything that the government tells them. That's at least as bad as the 50's when people were more likely to believe everything the government told them. But the only way this can get better is if politicians start showing more integrity, honesty, and trustworthiness.
Posted by Christopher R Taylor at 9:09 AM