"Will the piercing of ears be similarly restricted? " 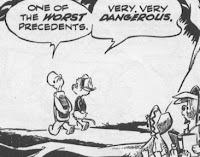 The basic concept of judges is someone who makes wise judgements, a man who can discern and rule based on wisdom and reason. Judges in theory take the facts into account and then issue a statement deciding a case with prudence and common sense to render the most just and proper decision.

Solomon is considered very wise for the decisions given in the Bible, rulings based on his judgement. However, the Common Law system that England and the US follow (along with some other nations) is based less on wisdom and discernment and more on precedent and previous judgements. Where someone had to show reasonable wisdom at some point, the ones that come after increasingly follow this system.

For example, the city of San Francisco is considering a new law banning circumcision in the city limits. This is a direct, specific law opposing religious practice by Jews, Muslims, and some other religions - and many Christians carry out this practice as well. The architects of the law argue that this practice is barbaric and destructive, so it is permissible to ban such an act like it would be to ban human sacrifice.

At the Volokh conspiracy, Eugene Volokh suggested ways that the courts could rule on this issue from various angles, such as parental control and religious freedom. But the arguments all hinged on specific previous rulings by other courts:

Two decades before Smith, Wisconsin v. Yoder (1972) held that the Amish were entitled to an exemption from a generally applicable law requiring children to attend schools (public or private) up to 16; and Smith did not overrule Yoder on this score.

Also noted were various legal concepts such as "strict scrutiny" "colorable claim" and "hybrid solution," quick phrases (that in years past would have been in Latin) that are used to describe legal concepts that courts use to make decisions.

Basically, Volokh looked at tools that judges and lawyers use to argue and decide cases, following previous decisions and structures established by other judges and lawyers, who in turn did so based on judges and lawyers previous to them, and so on.
In a sense this is not so unreasonable, as good decisions will tend to lend to further good decisions, and every realm of endeavor will have its jargon and tools to finish the job. Judges should rely on the wisdom of previous courts when considering a case, and lawyers need to know how things have gone before in order to understand how to argue a present case.

The problem is, this teetering system of stacking precedents and legal concepts has moved incrementally further and further away from the principle of prudence and wisdom, so that judges make a decision based on previous decisions rather than discernment. In worst cases, they simply rule based on which lawyer has the most compelling or clever argument.

Worse still, when judges do try to rule without precedent, they tend to do so based on personal whim and political tilt rather than overall wisdom and reason; witness the 9th circuit court who is perpetually overturned for making idiotic judgements in line with what they prefer to be true rather than what they know to be true.

This system of precedent makes life easier for judges, they don't have to be men of discernment and understanding, just scholars who know various previous arguments and who listen to lawyers who do the research.

And after millions of court cases, judges and lawyers have plenty of options they can choose from, often contradictory or in diametric opposition. The case in point here is a useful example of how this works.
So these two rulings say opposite things, and both are established precedent. So you can, using precedent, rule however you want based on the arguments lawyers present, what you're aware of, and which you prefer.

That means the precedent system is simply a tool to achieve goals rather than a structure to assist wise judgement. If a judge cannot rely on the precedent system to guide them properly and wisely toward a just judgement, it merely becomes a smorgasbord of legal decisions to pick and choose from to justify the judge's whims.

And without a clear chain of specific decisions to follow, there's not really much point in following any precedent, since you can usually find one that will argue what you prefer to be true. The system fails to provide guidance and fails in its purpose.

A wise judge would not need precedent to make a decision, since the case its self and its specific situation would render a proper judgement apparent with enough discernment, study, and reason applied to it. An unwise judge can simply pick through the precedents that stack up for the one that they prefer.

That's given us a system where judges can rule exactly opposite each other, render foolish and bizarre decisions that elude common sense, and justice is in the pocket of the most clever lawyer rather than ruling over them all.
Posted by Christopher R Taylor at 7:32 AM