"The acquisition of wealth is no longer the driving force in our lives. We work to better ourselves and the rest of humanity."
-Captain Picard 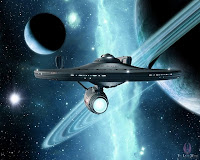 When I was young I thought the few episodes of Star Trek were really neat, especially the messages they gave. It didn't matter how you looked or how weird the culture was, everyone treated them with respect and met them head on as if they were valid. The Next Generation took this idea even further, and that appeals to a lot of people.

However, as I got older, I started to notice some problems with the politics of Star Trek. The original series wasn't so bad but the Next Generation one took things a bit too far. First off, they took the "non intervention" part of the Prime Directive a bit too far. Kirk and company were willing to shrug at it when they had to, but the new guys were utterly slavish to the code regardless of how irrational or self destructive it was.

Then there was the money thing. They wanted to portray a world where nobody had or used money, which was so idiotic it was abandoned in later series. Look, I understand that with transporter technology you can generate pretty much anything you want, but people have to gather the raw materials you use to generate this stuff, they have to build and maintain the machines. If you don't pay them, why on earth would they do it?

The NewsReal blog took a look at Star Trek and found 10 political messages in them that Roddenberry and crew injected into the various incarnations of the show.
One last bit. Star Trek for all its leftist ideals and multiculturalist diversity love was amazingly bigoted. Every single guy that played a Ferengi had a Jewish last name in the credits. All the Klingons were played by black people. Vulcans were all white. Each of the various races were played by specific ethnic types, then their stereotypical behavior was exaggerated int he races.

I like Star Trek, particularly the original series, but they really did lay it on thick sometimes with the leftist ideology.
Posted by Christopher R Taylor at 9:14 AM

I agree with a lot of these, except this one:

"The Borg: They represent anyone that the left disagrees with."

I always thought the Borg were purposefully portrayed as the result of extreme collectivism. They were the ultimate Randian villians.

I remember the Next Generation episode where they first met the Ferengi. Riker's explanatory remark was "they're like the old Yankee traders" and they believed in the "pursuit of profit", the last word said with a disdainful sneer.

They became my favorite race.

I think the borg represent the worst of collectivism too, and so did the NewsReal guys, but you know I doubt that's what the lefty writers had in mind. I think they were thinking more "fascist=right wing dicatator, that's what they're like yadda yadda"

Yeah, I found the relentless preaching of the franchise a bit wearying after a while, particularly in Next Generation. That being said, I did generally enjoy the various Star Trek offerings, particularly DS9.

By the way, notwithstanding your point about stereotyping, note that Tuvok (in "Voyager") is a notable exception, as are Christopher Lloyd (Kruge in "Search for Spock"), John Larroquette (Maltz in "Search for Spock") and Christopher Plummer (Chang in "Undiscovered Country"). Your main point stands, but there are exceptions that trekkers such as myself can readily bring to mind!