"We believe that this initiative could be a precursor to a levy on bank and credit union deposits if Ireland’s solvency position becomes even more challenged." 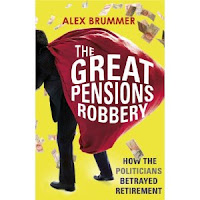 A few months back I reported that the IRS was looking into the legality and how they could raid retirement accounts for government funds. I was told that wouldn't ever happen by an accountant friend, that it was just an attempt to scare people into buying gold.

Just last week, the Irish government decided to do just that, to get help from the EU. Claire O'Sullivan at the Irish Examiner reports:

part-funding the jobs initiative with a four-year levy on private pension savings that is backdated to January 1 this year.

The 0.6% levy has been established to raise €470 million a year. Over the four years that it is supposed to operate, it should raise €1.88 billion from the funds of private sector employees and pensioners. Public sector employees and non-residents will not be subject to the tax and neither will any funds that are already in wind-up before today.

Perhaps emboldened by this move, President Obama has decided to do the same thing, to Federal Employee pensions. Zachary Goldfarb at the Washington Post reports:

Treasury Secretary Timothy F. Geithner has warned for months that the government would soon hit the $14.3 trillion debt ceiling — a legal limit on how much it can borrow. With that limit reached Monday, Geithner is undertaking special measures in an effort to postpone the day when he will no longer have enough funds to pay all of the government’s bills.

Geithner, who has already suspended a program that helps state and local government manage their finances, will begin to borrow from retirement funds for federal workers. The measure won’t have an impact on retirees because the Treasury is legally required to reimburse the program.

Yeah, sure. It will all be okay, the government will fix it, later. Just like the banks - oops I guess about half of you went under, but it worked out for our fat cat buddies at Citi and Goldman Sachs.

The federal government wants everyone to believe that they'll pay back every penny when they've got their fiscal house in order, that this is just a stop gap maneuver. Does anyone think they'll stop spending? Sure, this is being framed in terms of how evil Republicans are to not raise the debt ceiling but look at what the Obama administration is willing to do in order to keep spending.

They have a choice here: cuts to match the GOP's plan, or raid pensions and shut parts of the government down in their refusal to do so. Look at what they'd rather do than cut anything.

In a way I'm glad this happened, because it demonstrates the depths to which the Obama administration will stoop to not cut spending. Nothing is safe, not even your retirement account. Everything must bow to the federal government's rapacious, endless lust for your money. Spending cuts are unthinkable, more revenue must be found.

And that revenue comes from you. But hey, by all means, next time an election comes up, vote for the guy that promises you more and scares you by saying his opponent will force old people to eat dog food. Cling to all those pet programs. Someone else will pay for them, right?
Posted by Christopher R Taylor at 8:47 AM

What are we supposed to do during the next election when the two choices are effectively two sides of the same coin? Not trying to be snarky. I just think we are being screwed here and there does not seem to be a way out if it.

Another interesting phenomenon related to people's retirement that has gone mostly unreported: Last year Obama passed a law that reduced part of everyone's FICA payroll tax (the Social Security portion) by 2%. I know for a fact this is true becasue I cut paychecks twice a month and since January 1st my accounting software has told me I have to reduce this withholding (of course the employer's obligation was not reduce at all).

An across the board reduction in FICA tax is a fairly unprecendented tax cut. To my knowledge we've never seen anything like it, and if a Republican President had done it the Democrats would screaming for their head for trying to sabotage Soc. Security funding. It's also an odd tax for a Democrat to pass because it is fairly regressive, it applies equal treatment to tax payers across most income levels (from minimum wage to the $106,800 income cutoff for Soc Sec contributions, everyone pays the same proportion of their paycheck for these taxes, and they are exempt from itemized deductions like home mortage interest or retirement savings). And that also means it will be exceptionally hard politically to reinstate that 2% withholding because doing so will mean increasing taxes (from the previous year) on minimum wage earners.

What's even more interesting is that I've read from a few different commenters on the internet, who may or may not know what they are talking about, that in order to make up for the income that has been diverted by these tax cuts, the Federal Government is taking (borrowed) money out of general revenue and applying it towards Social Security. If this is true, it's an unprecedented phenomenon as well.

I don't know why this never gets reported, but to me it is a very interesting story and I wish some resourceful up-and-coming blogger (wink wink) would properly research it and report it to the world.

I tend ot think Republican bloggers ignore the story because they don't want to admit Obama gave anyone a substantial tax cut (which it is, and he did), and Democrats tend to ignore it because they have no idea how to exploit it politically.

I would say the way to address this problem, Lance, is to always vote for the one that promises and argues for smaller government and less spending. If they get into office and don't follow through, then vote for the guy who argues that against him, and keep doing it until it sticks.

Whether we have time for this solution to make a difference or not is the question - I suspect no.

And I've heard or read nothing whatsoever about that, Eric, I'll see what I can find out.