"Interestingly, George W. Bush is at 50 percent approval, 49 percent disapproval, even in this sample wildly weighted in favor of the Democrats." 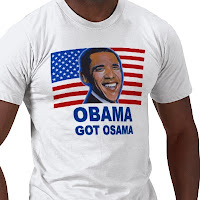 For those of us who did not fall for the hype, the 2008 election was particularly disturbing. Watching President Obama be described as "almost godlike," "a lightworker" and shown repeatedly by mainstream media photos with a halo around his head was more than we could stomach. The adoration and fawning worship of Obama fans in 2008 got to such a disturbing level that even fellow Democrats started to ask people to dial it back.

By now, people have worked out that President Obama is not some kind of superior being that glows with divine radiance. He will not ride a unicorn out of the sea in a shower of rainbows and people do, in fact, have to worry about paying for their gas and mortgage, as both have gone up.

There are many who believe that this ridiculously overstated image of Barack Obama has hurt him, as people expected unrealistic things and got an ordinary man. President Obama's polling numbers have continued an overall steady decline with a few upticks once in a while as people become more and more disappointed in the man.

Sure, people are glad to see Bin Laden dead, and they credit the president with making the right decision, but there's not a massive wave of euphoria or a return to the 2008 adoration of the president - for most of us, at least.

Despite that, or perhaps because of it, we're seeing a big push by the left to push the Bin Laden announcement as the greatest action anyone has ever taken in the history of the world. The talking points seem to be "risky decision" "bold" and "brave," repeated over and over by talking heads and pundits around America.

Consider the way this piece from the LA Times is written:

The nail-biting moment, the period when absolute disaster loomed, came at the very start.
...
The extraordinary drama surrounding the killing of Bin Laden encompassed the White House, the CIA and other arms of America's vast national security apparatus.
...
Obama wanted to be certain he had Bin Laden, and there was no guarantee that a smoking crater would yield proof. He had asked for a bolder plan, one that would allow the U.S. to take custody of Bin Laden or his body. It posed far more risk.

The narrative being presented over and over again is that this was an incredibly risky proposition, that it took immense bravery to attempt anything so bold. Some have taken this narrative to absurd levels, such as former Ambassador to Pakistan Wendy Chamberlain on CNN:

But he made that decision to go without telling Pakistan and that took some real courage, as much courage as our Navy SEALs did in pulling off a near flawless operation.

The problem with this narrative is the same problem President Obama faced in 2008: its overselling. They are pushing this so hard it strains credibility even with the president's biggest supporters. If you push something unlikely too hard, people will start to question it - and worse, when that narrative fails, then disgruntled backlash is even more likely.

The Democrats, many in the media, and leftists in general (but I repeat myself) are wondering why the "Osama bump" wasn't bigger and more enduring. Sure, there are some outlying polls, such as the latest AP poll that sampled Democrats almost 2:1 over Republicans and 10:1 over independents, but the general consensus is around 3 points, nothing particularly significant. So why not a greater bump?

The answer is not difficult to find, in fact its staring them in the face every day. People vote with their wallets, and when the economy struggles, even an event as welcome and appreciated as the death of America's greatest enemy isn't going to make much of a difference.

Here are a few headlines from last week, to give some perspective:
The truth is, getting Osama Bin Laden is a great thing, but not great enough to counter every day misery caused by inflation and a sluggish, slowing economy. If you're out of work, Bin Laden's death isn't going to make that much difference in your life, particularly a decade after 9/11.

Democrats are selling this hard, and want to make it the centerpiece of President Obama's reelection campaign, but if that's all he's got then its going to be a tough sell. And, as I noted last week's Word Around the Net roundup, according to polling the whole "gutsy call" push isn't impressing people any.

*This originally ran on the Washington Examiner Opinion Zone.
Posted by Christopher R Taylor at 8:36 AM