OIL SUBSIDIES AND THE TRUTH

"Across the country, people are willing to tighten their belts and sacrifice. The president should ask the oil industry to do the same."
-John Salazar 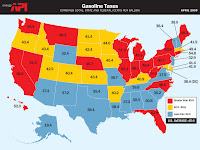 When President Obama gave a speech on the high price of gas, one of the things he called for was for congress to "take immediate action to eliminate unwarranted tax breaks for the oil and gas industry and use the dollars to invest in clean energy. "Usually these tax breaks are referred to as "subsidies" by the press and Democrats who point the finger of blame for high gas prices at oil companies.

The truth is, a tax break is not properly a subsidy. Subsidies are funds that governments give to someone to encourage and assist them to take an action. By reducing taxes for an action, that can have the same sort of effect, but it is more properly a tax break.

This is a critical difference, because it reveals a distinction in how people understand taxes and earning. Money businesses earn is their money and taxes are a small portion they send to the government. Calling tax breaks a "subsidy" reverses that fact, turning earnings into something the government owns, while taxes become the government allowing the company to keep some of their earnings.

So in a sense, taxes could be considered a sort of subsidy to the government, by sending it money to allow it to take actions, rather than the reverse, and as Jack Gerard, president of the American Petroleum Institute, says, the oil industry ends up paying $95 million a day in taxes.

In the case of oil companies, the tax breaks in question are part of IRS Code Section 199, which allows any business to deduct certain expenses from their tax returns. The maximum allowable deduction is 9% of those expenses, and this is part of the tax code passed in 2004 under the American Jobs Creation Act.

The idea at the time was to make it possible for businesses to take some risks and if those risks didn't pan out to get a tax break to reduce the pain and cost. This in theory would encourage businesses to expand and hire more.

These tax breaks appy to all businesses, not just oil companies, but the tax code specifically states that oil companies can only get a 6% break, not a 9%. Naturally since this is the tax code its a bit more complicated than a straight cut in taxes, but that's the basic gist of the law.

Its this that the Obama administration, Demcorats in congress, and many Republicans are calling to end. It isn't some sinister loophole in the tax code that oil companies benefit from, it isn't some clever trick they are using to get rich, its just part of the law that any company can take advantage of.

Removing this tax break would not reduce the price of oil. It probably wouldn't even change the profits oil companies make, since it isn't a very big chunk of their tax bill and companies tend to pass on expenses like tax increases to customers anyway. What it would do is give the federal government more money to play with and the entire "oil company subsidies" line is a way to distract from the Obama administration's role in the price of gas.

President Obama promised several times while running for the office that he'd raise energy prices, even using the term "skyrocket." He put a man in charge of the energy department who wants gas prices in the US to equal European gas prices (about $7 a gallon at the time of his statement), and President Obama has implemented policies that are causing all this to happen. All his rhetoric about oil companies and taxes is a distraction from these facts.

It is a fact oil companies make a lot of money, sure they are making massive profits, and sure they could do without the federal assistance they get in tax breaks. I'm fine with ending the tax write offs for them. Oil companies even get subsidies, because they are some of the world's leading alternative energy researchers - if someone finds a substitute for oil, they want to own it. But when it comes down to why oil prices are high, tax breaks and oil companies are not the reason.

And since the US Constitution does not permit the federal government to ever send any subsidies to any businesses, then they should be stopped no matter where they go, from milk to toys, even "clean energy." Just remember, tax breaks are not a subsidy, and they aren't only for oil companies.

*This originally ran on the Washington Examiner Opinion Zone.
Posted by Christopher R Taylor at 7:26 AM

"In fact, for each gallon of gas sold, oil companies average around 7 cents total profit including all steps along the way, while taxes at all government levels average around 50 cents."

I've seen this figure tossed around a lot, and always wondered what the price of a barrel of oil was when it was created. The oil companies make significantly more per gallon of gasoline sold if oil costs $120 per barrel than if it costs $60 per barrel. I'd bet that at current prices, they are clearing a lot more than 7 cents per gallon, but I could be wrong. That certainly doesn't mean they deserve to be skinned by the government, but I think it is very important to have those figures correct when we have these types of discussions.

It depends why the oil costs more per barrel. If that cost has gone up because their supplies are strained or because the dollar is worth less, then the actual amount they earn per gallon of gas may change little if any at all.

Oil companies are also in the strange position of costing themselves when their prices go up. They have to pay for fuel to transport the oil around, for example.

If I recall correctly, most if not all oil companies use an accounting/valuation method called Last In - First Out (LIFO). LIFO means that inventory produced or purchased last is used or sold or disposed of first. If inventory is sold for less than it cost to buy or produce, then it's considered a capital loss. If inventory sells for more than it cost to buy or produce, it's considered a capital gain.

So if the last round of crude purchased cost $120/barrel, then the inventory value of gasoline is considered based on that crude-oil price, plus the costs to refine, transport and market, plus other costs (like meeting environmental regulations). So it's quite possible that the retail price is set so as to ensure that there is not much in the way of capital gains, which might look good for investors, but cost the company dearly in taxes.

Secondly the profit mentioned is usually the gross profit, not the net profit. The net profit changes based on taxes, regulatory obligations, etc.

It's like the news announcing you won $1 million in the lottery. You will end up receiving less than half of that immediately after state, federal, and local taxes.