"Sure I love the idea of having a bit more in the pay check especially as prices are sky rocketing. But unless government expenses consistently come below income we are digging ourselves into a worse hole." 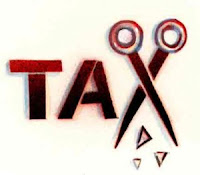 One of President Obama's biggest complaints is that he claims to have cut taxes in the "Stimulus" package, but nobody wants to give him credit. He further notes that despite the tax cuts, tax revenues and growth did not increase as conservatives claim will happen bye encouraging business.

The problem with the Obama "tax cuts" is that they weren't a reduction in the rate of taxation, they were a temporary two-year increase in the deductions and an increase in the earned income tax credit. That is technically a reduction in the amount of taxes the federal government takes from people's earnings, but it isn't something businesses and people can rely on in the future. Those "cuts" expired on December 31, 2010.

So businesses, sensing a hostile climate in Washington DC from President Obama and congress controlled by Majority Leader Harry Reid and then-Speaker Nancy Pelosi, were more cautious than tax cuts usually lead them to be. Further, the stimulus and TARP debacles both increased the expenses (and cash flow) into the economy with dollars that had no actual value. So the real value of each dollar reduced and businesses became very very hesitant to hire and expand.

Strangely enough, there is another tax cut that took effect this year that got almost no notice. Frequent commenter Eric brought it up in a post yesterday:

Last year Obama passed a law that reduced part of everyone's FICA payroll tax (the Social Security portion) by 2%. I know for a fact this is true because I cut paychecks twice a month and since January 1st my accounting software has told me I have to reduce this withholding (of course the employer's obligation was not reduce at all).

An across the board reduction in FICA tax is a fairly unprecedented tax cut. To my knowledge we've never seen anything like it, and if a Republican President had done it the Democrats would screaming for their head for trying to sabotage Soc. Security funding. It's also an odd tax for a Democrat to pass because it is fairly regressive, it applies equal treatment to tax payers across most income levels (from minimum wage to the $106,800 income cutoff for Soc Sec contributions, everyone pays the same proportion of their paycheck for these taxes, and they are exempt from itemized deductions like home mortgage interest or retirement savings). And that also means it will be exceptionally hard politically to reinstate that 2% withholding because doing so will mean increasing taxes (from the previous year) on minimum wage earners.

What do I keep telling people? Always read the comments.

The IRS sent out an email in December of last year to businessmen detailing how this works, but the gist of it is this: your social security deduction (FICA) tax went down from 6.2% to 4.2%. However, there is an additional 1.45% added into your FICA for medicare contributions, so the total will be more like 5.65% on your paycheck.

As as an employee you might not have noticed anything because that reduction was at the employee side, not employer (yes, your boss has to pay part of your social security tax), so your employer didn't get a break here, but you should have seen a slight bump in pay. In the 1960's your FICA deduction was raised from 4% to 6%, then it went up a bit more over time, now its back closer to the earlier level.

Here's the odd thing: Democrats were in charge of congress when this passed, and a Democrat president signed it into law. This is an actual, real tax cut, a reduction in the rate of taxation which you pay which is codified into law and takes another law to change, even if temporary. Democrats tend to hate and oppose all tax cuts, particularly ones that affect social security, and President Obama constantly goes on about how we need to raise taxes, so this is an oddity, to say the least.

Great job on his part, as far as I'm concerned - and high fives all around to the Democrats for pulling this off, too bad you didn't make it permanent. Maybe the GOP congress can.
The federal government claims this will have no effect on Social Security benefits in the future, but since most people figure the program will have collapsed by the time we retire anyway, I don't suppose it matters one way or another.

Now, the federal government is complaining that it needs money and cutting taxes is counter to how the left tends to understand how to raise revenues, so what is funding social security now? Here's what I mean. There is no real "Social Security Trust Fund" that is set aside like a vault to protect it and keep it until people retire. This isn't a pension or a retirement account. All that this "fund" consists of is treasury bonds that have been purchased (from themselves) which has been routinely spent on other things like aircraft carriers and subsidies for corn farmers when there was a surplus in the past (on paper).

Social Security in the past as been more or less "pay as you go" where tax revenues paid for current recipients of social security. You do not get the FICA taxes you pay put into an account in your name which you realize at retirement. You're paying for people who've already retired.

If you reduce the amount of money being taken in for this, then it has to be made up somewhere else, it seems. Finding out what is being done to make up for that is not easy. Typically the Obama administration simply spends the money and borrows or goes into debt more because nobody can stop them. Is that what's going on here, with the presumption that they can raise taxes to make up for it later? Certainly the recent raid on federal employee pensions suggests they understand this cannot go on forever.

It is true that some people hit the annual cap of how much they have to pay in FICA each year (around $100,000) before the year is up, and in their case that means no change in terms of revenue: they're already putting as much up as the government requires, so reducing the rate that happens just means it takes a bit longer in a year. Most folks, however, never hit that cap.

Various commenters around the internet claim that this reduction will be offset from the general fund, but that's not just contradictory (the social security fund is basically used as part of the general fund) but not reasonable: there's no money in the general fund. When a nation runs a debt of over a trillion dollars more a month, you can't borrow from anything - there's nothing to borrow.

So who knows what's going on behind the scenes. Some employees will take the few hundred dollars they get from this and invest it in some sort of savings for retirement, or buy something lasting like gold, but I suspect most will just use it to make ends meet, these days.
Posted by Christopher R Taylor at 10:17 AM

Excellent exploration of the issue, my friend. I had not realized they jacked the medicare withholding up almost in proportion to the Soc Security tax cut, so the cuts were not as significant as I thought (2% is significant, .55% not so much) and that may be why they havne't got much exposure, but as you mention, it is the way they are doing it that I find so interesting. In my working lifetime, these rates have never been messed around with like this.

I don't think its an increase I think it has been at that level since they implemented Medicare.