"Mass transportation is doomed to failure in North America because a person's car is the only place where he can be alone and think."
-Marshall McLuhan 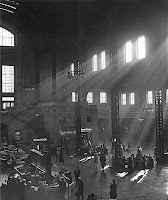 The train post I put up yesterday generated some interest and Bob Greenwade from my home state brought up a few points I'd like to address here.

First off, the point of my article wasn't how awful trains are, but that we can't afford them right now because of the state of the Federal government. Whether or not are supposed to make money or are wonderful or not doesn't really matter - they don't make money, they cost it. Amtrak costs a lot of money every single year. That's money the federal government simply does not have to spend.

Cuts have to be made, and the place to start is in luxuries, things that aren't critical for the federal government's basic duties and requirements. Trains, like them or not, are not part of those basic duties. When we're fourteen trillion dollars in debt, that kind of thing simply has to go.

Now, as for trains making money or not, they simply don't. Amtrak has never, ever made money. There are a few routes that earn a bit, but the rest eat up that profit totally and the net loss is more than a billion dollars a year since 2000. Now, in terms of the vast expenditures of the federal government a billion isn't much but that really is a lot of money.

Now, Bob pointed out that highways don't make money, airports don't make money; that no public transportation makes money so trains ought not be held to a different standard. It is true that these other organizations are all net losses but the comparison is largely inaccurate.

Roads and airports are not services, they are structures. No one expects any structure to make a profit; its a structure. No one expects the physical rails of steel and wood stretched across the nation to make money either. They're a net expense of an enterprise, like personnel or fuel. The rails cost money just like roads cost money, and they have to be considered an expense. Even efforts like toll bridges don't make enough money to maintain a bridge, tolls are usually intended to help repay the cost of the bridge over time.

The reasons for those losses is easily understood when you look at the drawbacks of rail: slower, always late, usually in the worst parts of town (Bob is correct, some train stations such as the ones in Oregon are in pretty nice areas), poor service, and high expense. In exchange they offer better dining (for even more cost), nicer scenery, the ability to get up and move around, and a sense of romance - oh, and as Bob points out, significantly less painful security measures. Nobody gropes your little girl or denies you the ability to take water on the train in a 90 minute delay before boarding. For most commuters, those just are not positive enough to make up for the negatives. So they don't ride the rails much, and who could blame them?
Yes, as Bob points out, most airlines (if not all) charge for meals these days, but they charge less than the snack bar on a train. The quality is roughly equivalent, sadly. Dining cars on trains tend to serve better fare, but they are really expensive, and nobody hands out snacks or beverages while you're on the train despite it being a significantly longer trip.

Railroads were cutting edge, amazing technology... in the mid 19th century. In the 21st century, they are a bit creaky, no matter how fast Japan can make them go. The overall result is that they cannot compete well with modern technology. One reason trains were so wonderful is that they were tireless and faster than a horse. Well, trains are slow and fuel gobbling monsters compared to modern cars, who can go thousands more places than trains ever considered.

One final point that was brought up is right-of-way. Amtrak does not have the right of way on any rails; freight always gets the right of way. However, Bob was right in his correction, there are some Amtrak-owned rails (which freight might rent, but likely does not).
Amtrak's website says:

So it was inaccurate when I wrote that amtrak owns no rail lines. Similarly, Amtrak does own a few of its own stations, but most are owned by freight lines.

When a freight train needs that line at the same time as Amtrak, the freight train gets the rails and Amtrak trains must step aside. There is no federal law requiring freight to give way to Amtrak. In fact, in the past, when freight trains have changed routes or torn out rail lines, Amtrak has had to change its schedules and routes. Here are a few examples:
I don't want to see passenger trains go away. I love them, as I said repeatedly. I ride the train when I need to go long distance alone as I have no car and it used to be significantly cheaper than air travel. I would love to see some private business find a way to make money with rail, but right now that's not possible.

In the past I've written that I think a mini nuclear reactor on a train would give it all the power it ever needed with no fuel consumption, thus reducing cost significantly. A nuke would generate enough power that fewer engines would be required for some trips (cross mountain freight often uses more than one engine for the extra power), and the lack of fuel costs would greatly reduce the expenses for a rail. That means the cost per person would drop significantly (trains are much less troubled by passengers than airlines to begin with), and it is very likely that trains could pull a profit - possibly even by enough of a margin to become more luxurious and pleasant to ride.

The problem with this scheme is that some people are terrified of nuclear power and the idea of having any train anywhere run on a rail with a nuke would be met with continuous protests and opposition. Until we can get past the wracking fear of nuclear power that decades of indoctrination filled us with, my scheme is simply impossible to consider. But it would work, I think, and maybe in the future a Renaissance of rail travel will arrive.

But for now, Amtrak has to go. People, this is how we have to look at things until the federal government gets its act together. Things have to be cut, even if we love them. It has to happen for us to have a future as a nation. Maybe its unfair, but the generations that came before didn't give a damn about that and congress didn't give a damn about that up to even this year.

These are the hard choices we have to make now because nobody wanted to in the past. That's just how life is sometimes.
Posted by Christopher R Taylor at 9:08 AM

Nice responses to peoples comments CT. I also like that you dropped in a little tweak about a small nuclear powered train. I love the idea and I also love the idea that people may read this and get all worked up about it. Well done.

Of the "examples" you gave of Amtrak changing its schedule to accommodate freight rail, none had to do with accommodating freight rail.

The North Star was discontinued as part of "budget cutting," along with several other lines during that period.

The Desert Wind and Pioneer were discontinued after a failed attempt at cost-saving by reducing service from seven days a week to three (it had the opposite effect).

The Kentucky Cardinal was discontinued because of low ridership; the Louisville and Indiana railroad refused to maintain its track to a level allowing for speeds over 30mph.

The Three Rivers was continued because the equipment had become outdated and dilapidated, and the people in charge didn't want to spend money on upgrades.

The only change Amtrak has ever made because of a rail company decision was when the Sunset Limited had to be rerouted around Phoenix into nearby Maricopa because Union Pacific decided to close part of the rail west of Phoenix, making through traffic impossible. The Federal government could have saved that connection but chose not to, for reasons never really given.

On other points: if a city's downtown area is badly kept, it's not Amtrak's fault. Also there's often no comparison with airports, because many (if not most) locations served by Amtrak do not have airports.

And where do you get the idea that trains are "fuel-gobbling monsters compared to modern cars"? On a per-passenger-mile basis, trains are much more efficient than either automobiles or airplanes (memory tells me 15% and 20% more efficient respectively, but I'm not sure and I don't have the report right at hand). That's not even counting the smaller land footprint of building a rail versus just putting down more lanes of highway.

But there's plenty of movement to get some of the old lines reinstated. The work for the Pioneer and North Coast Hiawatha are quite serious, there's been plenty of noise about the eastern leg of the Sunset Limited, the people who wanted to save the Three Rivers never really gave up, and I've even heard some vague rumblings about the Desert Wind and the Floridian.

Do you think they want passenger rail in their community just because it's "cool"? Maybe a few use that reason, but most want it because they know that a well-run passenger rail means jobs, convenient transportation, and many other community benefits.

I hope some day we have a well-run passenger rail, because that's not what Amtrak is. I understand you love trains, Bob, and I understand that you want them around, but you have to look at the other side, too.

We're in a crisis. Some things have to go.

"Do you think they want passenger rail in their community just because it's "cool"? "

In many cases, yes, absolutely.
Oklahoma has one Amtrack line that runs between OKC and Dallas. It makes one round trip per day, making it useless for commuters. It is a novelty method of traveling, and while I do take advantage of it on occasion because it is there and it is fun, I'd be the first to endorse having the government shut it down.