"So how big a challenge rating is a Gnoll Pup?" 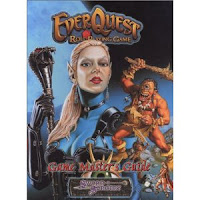 For a while now my gaming buddies and I have been using Skype to communicate over the internet when we do instances in World of Warcraft. The program is easy to use and set up, and gives clear and reliable sound. It is a bit of a system hog and for some reason my version seems to lose clarity after a while, but its free and works well.

Recently I read about a program called Maptool by RPTools that allows you to create a graphical map setting which can be interacted with and is designed to work well with role playing games. It can be used to set up remote versions of the map which are less informative than the GM's version, and each player can control their character on the map as the game unfolds.

In other words, my buddy in England and my buddy in Michigan can join in a game with my buddies from Oregon and we can play a pen and paper (real) role playing game from our computers, something gamers have been dreaming about since the concept of RPGs really came into existence in the mid 70s. It took a lot longer than I figured, but it appears this is viable.

The Maptool program is a Java based platform, so it works on pretty much any computer, and it is incredibly powerful. I only want to access the surface layer of the program's capabilities, but even that much is impressive. The map can be manipulated on the fly by the GM, it handles darkness, measurements, templates for area effects, lighting, and even sight-blocking and line of sight issues.

The only problem is now that I've volunteered to run a game and set all this up, now I have to learn how to run the program and I've found that as I get older, I have less energy and less inclination to learn something entirely new than I once did. I guess this is what they mean by "an old dog can't learn new tricks." That's not purely true, but it is true he's a lot less likely to want to.

I decided to run a game set in Everquest's world, one of the best and most fully fleshed out game worlds I've ever seen. The game its self was pretty rough in a lot of ways, but the setting was a real gem. Swords&Sorcery came out with a D20 version of Everquest that can be played in person, and I'm getting that together, plus doing some writing of my own. So far I've found a couple of the books on Amazon for pretty cheap.

In any case, I'll let you know how it goes when we run the game. So far I've run through the tutorials on the RPTools page, and have messed around a bit with the mapping program. I've been running games since 1981 so the idea of building a campaign and coming up with scenarios is no particular challenge, the map is going to be the tough part.
Posted by Christopher R Taylor at 7:46 AM

When was I going to be told about this? I am bring Dshai out of retirement!!!!

We assumed that there would be a stinky drunken monk there. I'm going to Shaman it up.

I sent ya an email you knucklehead! Still, its been a plan in progress.

I will be there for sure or online on Skype for sure. I love the idea.

Online only, this will be the only pen/pencil role playing game I get to play without you molesting me with your eyes!