AN INDIANA MAN'S HOME IS NOT HIS CASTLE

"I'm the po-lice, you have to do what I say!"
-Samuel L. Jackson, Lakeview Terrace 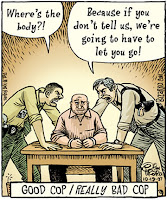 Like most conservatives, perhaps all, I'm a law and order guy. I have tremendous respect and admiration for the police, and count several among my friends over the years. Every police officer I've had to deal with has been professional and courteous as the situation allowed, and they have a very hard job to do.

For example, a cop bashes your door in and invades your home with a gun, demanding you surrender. Turns out he meant to get 1577 Oak street, not 1575, where you live, and now he owes you a new door and years of therapy for your traumatized kids. This doesn't happen very often, if for no other reason than they'd never live it down with the other cops, but it does happen sometimes.

There are other instances where cops unlawfully enter a home. The Indiana Courts examined this situation, courtesy Orin Kerr at Volokh Conspiracy:

The defendant was charged with misdemeanor battery against a police officer, among other things. At trial, he wanted to argue to the jury that it was lawful to shove the officer because he had a citizen’s right to reasonably resist unlawful entry into his home.

This case went all the way to the state supreme court, who decided that you can't fight a cop even when he breaks the law and invades your home. The court argued that while in the past, common law provided for people to fight back against legal authorities for invading their home improperly, these days there are legal means to deal with it, so its illegal to fight the cop.

This ruling is part of a basic judicial principle these days that violence is necessarily bad and wrong, and further those old founding fathers and previous legal scholars were old fashioned and that doesn't apply these days.

This ruling is very wrong in my opinion, and further establishes a very uncomfortable precedent in American law. Already it is illegal to lie to federal law enforcement officers, when freedom of speech should permit people to lie to government officials, if anyone. By creating a separate, superior class of people in law enforcement, the US moves closer to the very things the US was founded to fight against.

Anyone invading your home - police or otherwise - in an unlawful manner triggers your right to self defense. If there is one principle held higher than almost any other by the founding fathers and American history, it is that every man may defend his family and property. That's the idea behind "castle laws" such as Texas has: you can kill to defend yourself and your home.

Police are not somehow immune to this feature of American law and philosophy. If you invade my home illegally, you're breaking the law and I have the right to use force to defend myself and my home, period.

The idea that people can use the legal system to address grievances is accurate, but insufficient. People have always had the legal system to do this with, even in England the land the founding fathers fled seeking liberty. It wasn't always perfect and it didn't always protect people but neither does our system now.

Violence is a tool, like the legal system, rhetoric, and many others you can use to fight injustice. The courts want to remove that tool from citizens, and that's something we must always and vigorously oppose.

*This originally ran at the Washington Examiner Opinion Zone, and got no tweets or comments. One I wrote about trains got 40 tweets and lots of comments. Priorities.
Posted by Christopher R Taylor at 9:14 AM

Very interesting and troubling case. It should be clarified that the case went to the Indiana Supremem Court and not the US Supremem Court, so it is still, at this point, an issue mainly for Indianans.

It seems to me what should have been at issue here was whether or not the police were violating the law in attempting to enter his house. If the wife was expressing consent for them to enter, but the husband was not, they may have been acting within protocal... but this is not the question that got asked at the trial.

Because of the special circumstances this could have been a narrow and fairly reasonable ruling. The Indiana Supreme Court decided to go big with it. It's a bad precedent and should be overturned.

But the Fourth Amendment suffereth violence and has for years. Without a restoration of the Fourth we live in a police state.