These are the ongoing exploits of our gaming group playing Everquest using the D20 system. We're playing over the internet using Skype to chat and Maptools to show the action. 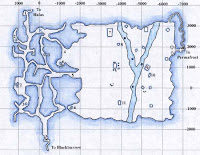 I spent a few hours building the "maze" section of the Everfrost mountains outside Halas. For those who've played Everquest this is a familiar area, made up of a series of interconnecting, winding canyons in the rugged, frozen mountains of the north.

Most of the session was off the map in Halas, wandering around getting information and interacting with NPCs. When I used the map, it worked well. The Maze is a pretty huge area, so I was worried that the map would take forever to load and bog down the Maptools program but nobody had any problems.

I still can't get the vision blocking to work right, and fog of war simply blacks out the entire map for the players. I don't know if this is a bug in the newest build of Maptools or something I'm doing wrong, but its frustrating because that's one of the most powerful and useful tools that the GM can use with the program.

I'm still learning how to set up challenges in D20. I ran AD&D ages ago when it was just plain AD&D, but 3.5 does things differently enough that I'm still uncertain what the players can and cannot deal with. And since D20 is largely a 1-die system, the rolls are so wildly random that even a simple encounter can go horribly wrong - or a really challenging encounter go quite easily.

What I mean is this: when you roll a d20, every single number on the die has an equal 5% chance of showing up. That means you have the same chance to roll a 1 as a 20. In games like the Hero System, you roll multiple dice, and the more dice you roll, the more smooth a "bell curve" develops, which can make the odds more predictable. Because of the way statistics work, the more dice you roll, the more likely you are to roll the middle range of those dice (so with 3d6 its around 10-11, since the average roll on a d6 is 3.5).

In any case, it went pretty well - I even played with a voice modulator program to fake a female and little person voice, which had mixed results. Because of how the modulator works, I have to speak normally or it delivers a tone of voice similar to Minnie Mouse and people have a hard time understanding me. Add to that the distortion of tone in Skype, and it gets problematic.

The second problem is that I run Skype on a different system than the Maptools and my work system, and that means I had to swap. I'm working on a way to smooth that out.

Overall it went well, in fact I couldn't really tell much difference between playing with people thousands of miles apart over this system and playing face to face, except there was less screwing around and side chatter over Skype than there usually is in person.
Posted by Christopher R Taylor at 8:43 AM