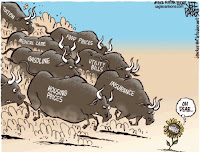 Prices are going up. There's just no way around that, just about everything is more expensive, from gas to fuel to clothes, almost everything you buy on a normal day has gotten more expensive. Yet the official word from the Obama administration is that prices are rising only slightly, under 3% which is not unusual for normal economic conditions.

What's going on? Why don't they see what we feel in our wallets every day? Newsweek, of all places, reports on how this works and why the Consumer Price Index (CPI) is broken:

Back in March, the president of the New York Federal Reserve, William Dudley, was trying to explain to the citizens of Queens, N.Y., why they had no cause to worry about inflation. Dudley, a former chief economist at Goldman Sachs, put it this way: “Today you can buy an iPad 2 that costs the same as an iPad 1 that is twice as powerful. You have to look at the prices of all things.” Quick as a flash came a voice from the audience: “I can’t eat an iPad.”

One of the tricks used is to index prices by including items which are not going up and tend to get lower in price. Technology, for example, tends to go down in price over the years, but it is factored in with food. The problem is, you buy an I-Pod once every few years and food as much as every day.

Other expenses such as furnishings have not gone up much in recent months, but you only buy dinette set once every few decades, and you buy gas once a week or more.

With gas prices increasing, that pushes the price of nearly everything up because of costs of packaging and shipping. The biggest problem, however, is the Federal Reserve's "Quantitative Easing" plan to flood money into the market, money which has no actual value and is causing the dollar to lose value as well. That means everything goes up in price relative to your static wages.

And, of course, the ill-advised biofuels push has been causing inflation in food prices for half a decade now by encouraging farmers to grow for ethanol production instead of food production. Shortages, increases in price, and lower quality all result from this as supermarkets scramble for sources to offer produce to their customers.

It is no secret that the Consumer Price Index has been "improved" 24 times since its inception in 1978, each time to help calculate things to smooth out inflation. Using the original method, inflation right now would be at a 10% rate, which is more plausible when you buy groceries or a pair of pants.

QE2 is set to end in July, and some economists believe that the inflation people have noticed will slow and end after that, but with gas prices going up and layoffs increasing, it is unlikely that this will bring any relief, even if inflation does slow.

Google is working on an index of online prices, which will give us a very different story from the official word, soon. Yet even that will be skewed, because online shopping tends to follow different economic pressures and usually does not include staples like bread and milk.

The truth is, we're facing much greater inflation than the official word out of the White House, and everyone who goes shopping knows it. The Obama administration is gambling that by keeping the official word (and thus most news reporting) low on inflation perception won't create worse conditions and the problem will just go away in a few months.

I think that gamble is mistaken, and I see prices continuing to grow as energy prices keep driving upward. What we're missing is a tough, investigative news media that digs into the truth and lets the country know, and all we're left with is guesswork and gut instinct.

All I know is when you’ve lost Newsweek, you’re not fooling anyone.

*This originally ran at the Washington Examiner Opinion Zone.
Posted by Christopher R Taylor at 9:04 AM