ANOTHER SORT OF APOCALYPSE

"These “Rapture” evangelists have no shame ... "
A lot of people on the internet are having a bunch of fun mocking Harold Camping's woeful "rapture" prediction, and its easy to see why. It was silly to begin with and failed utterly - and he's doubled down and called October, now. Maybe he figures at 89 and under all that stress he'll be dead by then so it won't matter.

Yet there is another set of apocalyptic predictions which have been uttered not just by one old man but dozens, even scores of prophets over the years. Like Camping who failed to predict the end of the world in 1994, these prophets keep having followers and believers despite their utter failure to accurately predict the future.

Like Ted Danson who in 1988 told David Letterman that the "oceans will be dead" by 1998. Well actually no one takes Danson seriously but still, its 2011 and the oceans aren't just alive, but vibrant and teeming with life.

Danson later on was on CNBC and he was asked about the oceans and whether they're dead. His answer?

DANSON: No. They’re not. But, I’m sure there was some hyperbole in what I said to draw attention to the issue, but you go to science journals now, 70% of the world’s fisheries are at a point of collapse.

Except... that's not true either. More hyperbole, I suppose. Although since Ted Danson has been flying around the world telling countries to stop commercial fishing, maybe he's presuming his influence is endangering these fisheries.

Tim Blair collected a bunch more end of the world predictions, all from environmentalist extremists and global warming alarmists:

There’s still hope for saving the planet from ourselves … 10 years left.

Larry David says, “You know, Al is a funny guy, but he’s also a very serious guy who believes humans may have only 10 years left to save the planet from turning into a total frying pan.”


The scientific consensus is that we’ve got only ten years left to address global warming.


Barack Obama has only four years to save the world. That is the stark assessment of NASA scientist and leading climate expert Jim Hansen.

And on and on. In total, Blair lines up 12 different end-of-the-world predictions by these people, ranging from 2002 to 2046, depending on who you ask. We all keep surviving the end of the world.
At least these people aren't crazy religious zealots predicting the coming of Jesus or anything. You can trust them, they're using science. Seriously, how many times can alarmists make predictions that are utterly untrue before people stop trusting them? Every single climate prediction based on their computer modeling has been utterly wrong.

Finally, a funny cartoon about the end of the world that hits more accurately and pointedly than anything else I've seen so far: 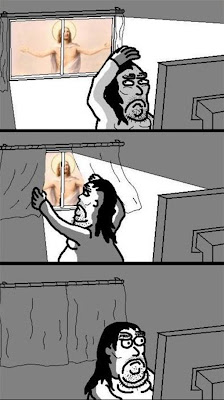 Posted by Christopher R Taylor at 7:51 AM