ANOTHER NAIL IN THE NEWS COFFIN 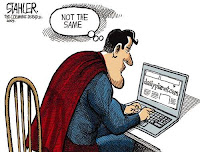 Newspapers are dying a slow, painful death as classified ads, advertising revenues, and subscriptions continue to slow and decline. To counter this, papers like the New York Times have turned their online content into a subscription system where a story stays up a day or so then goes behind a subscription wall.

There's a reliable, constant source of revenue that newspapers have been depending on in these hard times which may go away, and they're fighting to keep it. That revenue stream is the public postings that go into newspapers. These postings are not very often read but they are purchased by the local and state government in accordance with publicity laws. With the age of the internet, people are starting to wonder why the government is paying to put this stuff in newspapers fewer and fewer people read.

Maine, for example, spends $250,000 a year putting public postings in newspapers, and legislation is being proposed to shift that to the internet, where more and more people get their news and the cost would be immensely less for the state. It also would make the public notices easily searchable, continually available, and accessible worldwide.

By doing so, newspapers would lose another very predictable source of revenue and that would have a fairly significant impact on their ability to survive. Maine is examining the economic damage this would cause and whether its worth saving a few hundred thousand dollars of taxpayer money.

The problem is, as Instapundit points out, if there's another viable place to put these notices and save money, keeping them in newspapers amounts to a subsidy - taxpayer money spent to keep newspapers afloat.

I like newspapers in theory, but its been a very, very long time since I've actually sat down to read one as opposed to scanning a few headlines as I shove them into the wood stove building a fire on a frosty morning. And since I'm hardly alone in this, using them for public posting is like tacking a king's edict in the town square and figuring everyone knows about it.

Just for fun, here's a humorous bit someone emailed me about newspapers:
Posted by Christopher R Taylor at 7:33 AM

The Atlanta Journal-Constitution is read by people who have recently caught a fish and need something in which to wrap it.