WHOSE BUDGET GETS CUT?

If you choose not to decide, you still have made a choice
-Rush, "Free Will" 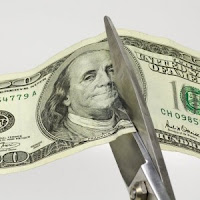 While we're having a national debate on how to deal with the vast debt and deficit levels the federal government has run up through irresponsible spending, sometimes the message gets a bit muddled. What is needed is a simple, clear statement of our alternatives that reaches out to everyone.

One of the more common talking points on the left is that we should go back to Clinton-era taxation and we'd be able to solve our problems. It is held as a matter of faith on the left that tax cuts resulted in these budgetary problems rather than massively increased spending.

Megan McArdle at The Altantic tackles this and points out a problem with this argument:

Which brings us to the simple statement of the choices we face:

Which would you rather have, cuts to your budget or cuts to the federal budget?

You can either cut the federal budget, which has grown by more than all budgets combined before it in the last two years and was already too gargantuan, or you can cut your own budget by paying more in taxes.

For those of you who think only the rich are going to pay more taxes, take a closer look at that graph at the top. That image shows where the taxable income is, and that mountain in the middle is the middle class. That's most of you who are reading. There's not enough money in the rich to fill for the crater our economy is spiraling around; we could tax everyone making $100,000 a year or more - hardly rich, especially in bigger cities - and still not make enough money to pay for this year's deficit alone.

When the left says "go back to Clinton era taxes" they mean "raise everyone's taxes" because that's what the Bush tax cuts affected: everyone's taxes. And as Ms McArdle notes, even that isn't enough, they'd have to tax more.

Even if you only did tax the rich, that would affect everyone's wallet anyway. If they raise taxes on the rich, that hurts the economy, slows growth, slows employment, raises prices, and results in cuts to your budget, even if your taxes don't get raised.

Let's be reasonable here. Does anyone, anywhere, think that a congress that for decades has spent incrementally more and more each year will somehow find Jesus and stop spending so much when they raise taxes? Giving congress more taxes with a promise to reduce the deficit instead of just blow it all is like giving a junkie a bag of drugs with the promise he'll flush it all. Raising taxes just gives congress more money to play with.

So that's what we're all faced with. What will it be, America? Will it be your budget that gets cuts, or the federal government?

*This originally ran at the Washington Examiner Opinion Zone.
Posted by Christopher R Taylor at 7:12 AM