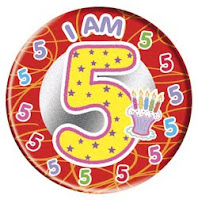 By the way, Word Around the Net hit five years online on the second of this month. For a couple years I used to keep track and the last two I haven't really thought about it until a few days later. When I started, President Bush was in the middle of his second term, Barack Obama had was just a state legislator in Illinois, Republicans controlled both houses of congress, and Italy was holding the Winter Olympics.

Blogging is a fairly new phenomenon, and five years at it is kind of a milestone. The first real blog was started in 1997 which means the things have only been around about fourteen years. Blogs didn't really take off until around 2004, when the first really big blogs came into public perception. Some blogs I always figured were around forever like Ace of Spades HQ started not that long before mine.

Its odd to me when I read on some other site about Word Around the Net being around a long time, it really doesn't seem like that long to me. I work on this site every day because its fun to me and its just lately started to pay a little bit from work on other sites like Washington Examiner Opinion Zone.

I did work a bit for Right Network last year, but they lost some of their investors and haven't paid for a while so I'm sort of on hold from them. If they get some money coming in from investors and maybe shows like Whatta Ya Know Joe? perhaps I can get into writing for them again.

Other writing has meant a little bit less content on WATN than usual, but since I post more every day than most blogs do, I don't suppose that's so awful. When I started up this blog I was worried that the market was so saturated no one would ever notice me. So I focused on something unusual and unique: comments on other sites. For a while it worked okay but I got into a bit of a trench, unable to find really interesting sites without spending hours every day trolling around and I never attracted the commenter base I'd hoped on.

I was hoping that after a year or so I'd get people sending me tips, comments, and information about where I could find good stuff, but that never panned out. So the comments logging died off, which is too bad in a way - there was some really great commentary out there to highlight and still is - but WATN grew after that.

This last year I got Instalinked for my Contrasts post on Obama vs Bush, and Small Dead Animals for the Vultures at the Feast post. I still get a lot of hits from those, but I was surprised at how small the Instalanche was. I'd envisioned tens of thousands of visitors from what people said on their sites, but I only got about 2k at the heaviest traffic day.

Five years has gone by pretty quickly from my perspective, and I have no clue what the next five years hold. Things have changed a lot over the years I've been doing WATN and I see no reason to think that will be any different for the future. I'll still be here long as I can keep putting up content I'm at least not ashamed of.

Thanks to everyone who keeps coming back and to anyone who spreads the word. You are all appreciated and its great to be able to reach out with my thoughts around the world like this. Maybe some of you might be interested in my other writing, I'll have a book out for e-readers by summer, God willing, and more to follow after that.

Thanks again to everyone,

Congrats, Christopher. Is always a pleasure reading your thoughts, whether they be insight on the political issues of the day, social commentary, or just a fun bit of goofiness. I think your writing is at its strongest when you talk about men's issues, and always look forward to those posts the most.

I tend to forget that you started WATN at almost the exact same time I left my old job and started my business. It turns 5 next month. Seems like WATN has been around a lot longer than that!

So congrats again, and I look forward to reading your posts heading into the 2012 election season!

Way to go! Doesn't seem like 5 years to me either. I followed you over from the World Mag blog, and I enjoy your posts. Thanks, and keep it going!
BW

Congrats on the five years -believe it or not, I found it via looking for your book.

Not sure why there's a lot of comments, but it's lonely in the comments section, especially from one who occasionally disagrees with you.