TO HIJAB OR NOT HIJAB

"In such a 'my Islam is just as good as your Islam' arm-wrestling contest, women are always the first to be sacrificed." 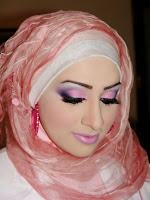 The headscarf that many Muslim women wear is called a hijab, and it is a sort of compromise due to the Koran's requirement that women be separated from men for the sake of chastity.

Believers, do not enter the houses of the Prophet for a meal without waiting for the proper time, unless you are given leave. But if you are invited, enter; and when you have eaten, disperse. Do not engage in familiar talk, for this would annoy the Prophet and he would be ashamed to bid you go; but of the truth God is not ashamed. If you ask his wives for anything, speak to them from behind a curtain. This is more chaste for your hearts and their hearts.
-Sura 33:53

The koran in general requires both men and women to dress modestly, and tradition in that area had women wearing veils over their faces in the Persian manner at the time Muhammad was alive. Depending on the translation, some interpret Sura 33: 59a as meaning veils:

O Prophet! Tell your wives and your daughters and the women of the believers to draw their clothes [veils?] all over their bodies

Most translations suggest full dresses, so no legs and arms are showing, and no cleavage but some are more specific about veils. The bulk of the last few Sura of the Koran are about women and how they are to behave, be treated, and so on; I speculate after reading it that this likely was prompted by Muhammad having to deal with his dozens of wives and trying to find some semblance of control and sanity, if not just out of frustration.

Here's the thing: the Koran never specifically tells women they have to be covered up with a burkha or wear a hijab. However, the clerics interpreting the Koran in an attempt to come up with practical ways of applying the rules and regulations in it have come up with these concepts. Sharia law requires a full shapeless bag in some areas, and some just a scarf over the head.

Think of it this way, say the US Constitution required women dress modestly, but does not give specifics. Over time as cases come up accusing women of not dressing modestly, judges begin to come up with precedent as to what is and is not modest. Some states decide this means a woman has to wear a burkha, some decide just a scarf. That's how it came about.

You have to understand that Sharia law basically presumes that women are overwhelmingly seductive and that men are helpless in their velvet claws of sexuality. That's why rape is not punished particularly badly and women get beaten for showing an ankle; they were exposing their overpowering sexual potency to helpless men who cannot stop themselves. So women have to be isolated, covered up, and always escorted everywhere to stop them from seducing every man nearby by accident. I'm not exaggerating here. Not long ago, an Imam in Australia famously quipped:

But in the event of adultery, the responsibility falls 90 per cent of the time with women. Why? Because the woman possesses the weapon of seduction. She is the one who takes her clothes off, cuts them short, acts flirtatious, puts on make-up and powder, and goes on the streets dallying. She is the one wearing a short dress, lifting it up, lowering it down, then a look, then a smile, then a word, then a greeting, then a chat, then a date, then a meeting, then a crime, then Long Bay Jail, then comes a merciless judge who gives you 65 years.
...
Muslim women must always keep their 'meat' covered whenever they venture out.

Infidel women who do not hide their 'meat' inside Jilbab and Hijab are either maid servants or whores.

The white Australian women who do not dress Islamically are maidservants or whores. In Islam, Muslim men are allowed to have unlimited sexual intercourse with maid servants and/or sexual slaves. A Muslim man commits rape if and only if he has sex with a Muslim woman out of wedlock. Having forced sex with an infidel woman does not at all constitute rape, Islamically speaking.
...
She has no one to blame but herself, for she has displayed her beauty to the whole world. Strapless, backless, sleeveless - they are nothing but satanical.

This is Shiekh Al Hilali, who likened women who dress immodestly like meat that cats will naturally run over to eat; men cannot help themselves, so women are to blame. The flaw in his argument is that women wearing a hijab can be pretty hot, even if they are technically dressing modestly (see the picture at the top).

So this is where the whole "women must be covered up" thing comes from. Back in 2006 I wrote about Noor, a girl who liked the scarf because she thought it was not just attractive, but it shows more modesty and that appealed to her, plus it displays her faith, which she is proud of.

Other girls are less happy with the scarf than Noor. Lamya Kaddor is an Islamic scholar living in Germany, a Muslim woman, and she does not wear the Hijab. Why?

It is even more likely to bring about the opposite of what God intended by exposing wearers of headscarves to discrimination. Today the intended protection against 'annoyances' is provided by a well-functioning legal system rather than by adherence to social rules from the past. A free state based on the rule of law protects a woman, for example by punishing attacks on her person.

She points out that the verses I listed above come from a section of the Koran calling for both men and women to be chaste, but the hijab and modern Islamic teaching seems to only apply them to women. By having only women wear the hijab and men do what they want, she believes this violates the spirit of the Koran.

Mona Eltahawy takes a different path. A Muslim woman writing for the Washington Post, she relates a horrific story from Saudi Arabia:

I lived in Saudi Arabia from age 15 – 21 and visited several times a year until 2000. A couple of years after I stopped visiting, a horrific fire broke out in a school in Mecca, home to the Muslim world’s holiest site. Fifteen girls burned to death because morality police standing outside the school wouldn’t let them out of the burning building. Why? Because they weren’t wearing headscarves and abayas, the black cloaks that girls and women must wear in public in Saudi Arabia.

She argues that if a girl wants to wear a scarf, she should be allowed to, and opposes the ban on hijabs at Turkish university campuses.

At the same time, she views the way hijabs and other specific coverings are required
in some areas as oppressive and that women end up pawns in a struggle between factions of Islam to prove they are the more faithful and proper Muslim sect.

Whether Muhammad would have agreed with the decision of the Saudi authorities or not is up to some question; I suspect based on my reading of the Koran that he probably would have allowed an exception to save the lives of the girls, but what he ruled seemed more based on his mood and the requirements of the time rather than any consistent ethic.

Muslim women seem to be getting a bit weary of being essentially property in their culture, but they are powerless to make changes, and only a few living outside hardline Muslim countries have any chance to make a statement or vary from what male clerics order.
Posted by Christopher R Taylor at 8:19 AM