REPORTING ON THE ECONOMY

"The stimulus package wont fix our economic problems overnight......but this is the beginning of the end."
-President Obama 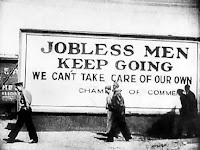 Ace at the Ace of Spades HQ Blog has a theory about the press and Republican presidents. He estimates that the press costs us several points of growth when there is a Republican president. How can they do this? Anyone who watched the media during President Bush's administration knows that every single bit of bad economic news got considerable coverage, while good economic news was mentioned less often, and always with a qualifier.

When President Bush took office, he inherited a brief recession caused by the dot com boom collapse and exacerbated by the 9/11 terrorist attacks. When he left office, the idiotic financial tricks and propped up housing prices by mortgage caused an even greater collapse. But between those events, the economy roared like rarely before, and the reporting tended to be glum and heavily qualified.

For example, in 2005, the "Black Friday" shopping period was in the middle of 52 months of uninterrupted job growth and economic good news. It was reported this way by the Baltimore Sun:

The LA Times reported on the news this way:

The same new story later admitted that the buying eked "several indexes to multi-year highs." Reporting a continuous drumbeat of all the bad news you can find while downplaying any good news has an affect on an economy which is largely based on public perception.

Meanwhile, with President Obama in office, the economic news is usually "unexpected" when things go wrong, and reported briefly as possible. While some indications show the economy is stumbling out of its worst state in 80 years, there are a lot of other, more troubling pieces of information.

Unemployment continues to hover around 10%. Food stamp dependency is the highest it has ever been in American history. Food and gas prices are rising, pushing inflation across all sectors of the economy. The housing market continues to crater, with record foreclosure numbers. Wages are stagnant and hours are being trimmed from workers. You just don't hear about any of this very much.
Overall, the picture is not very rosy, but reporting on these economic facts is far more brief and less emphasized than they were during the Bush administration under far better economic times.

And that's how it should be. I know you were expecting a conservative writer to wish the media would be more brutal to President Obama thus hurting his political future, but that's not what I want for America. Although it is waning, the press has considerable power to shape peoples' perception of the world and their economy. As Ace notes, bad press can hurt the economy, while good press might be able to help it.

I believe that the proper level of reporting on the economy is one of very delicate restraint. Tell the story, get it over with, and move on. To dwell on bad economic news is to harm the economy, depress viewers, and overall do damage to everyone in the world, not just the US, because it is still true that when the US sneezes, the world catches a cold.

What I'd like to see is greater consistency, with the press reporting on the news the same way during Republican governments as they do Democrat ones, on any topic from the economy to military news.

*This was originally posted at the Washington Examiner Opinion Zone.
Posted by Christopher R Taylor at 8:12 AM