SPECULATING ON WHO TO BLAME

"I think that I would have preferred a gradual adjustment."
-Senator Obama 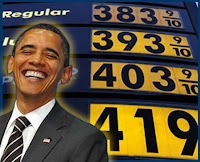 Recently George Stephanopoulos on Good Morning America portrayed American concerns about the price of gas as "gripes" and worried that this was causing President Obama's poll numbers to drop. President Obama has seized on a talking point that many in the media are echoing: the rising price of fuel is all due to oil speculators driving it up. Are evil speculators to blame? Did they drive up the price of fuel during the Bush administration as well?

Oil speculation is in essence a group of wealthy people and conglomerates betting on how much they think oil will be worth in the future. Speculators purchase a commodity such as comic books, commemorative plates, or oil with the expectation that they will be more valuable in the future, at which point they sell. The more valuable they believe this commodity will be, the more they're willing to spend on it.

In 2007 when gas prices last were this high, many blamed speculators for the high cost of driving, but according to the Economist, the Commodity Futures Trading Commission (CFTC) issued a report dismissing the role of speculators. Another study done a year later noted that speculators only drove up the price by about 6.4%, not much of a factor at all.

If speculators weren't to blame, what was? Well one pressure was the dropping value of the dollar. From 2006-2008, the dollar steadily plunged in value, making the amount it could buy less and less, so that prices such as oil necessarily went up. This had a broader effect worldwide than other currency price drops because the US Dollar is the currency used for all international transactions.

Another significant pressure on the price of oil at the time was increased demand from China and India. As more people wanted oil, the price was raised to take advantage of this interest, and the supplies were more stressed, driving the value of oil up.

This time around, speculators are accused again but are they to blame? Well, the dollar's value is dropping again as the debt load of the US continues to climb and the federal government shows no real interest in addressing the problem.

Compounding this problem was Federal Reserve chairman Berneke's bright idea of another round of Quantitative Easing, which was the federal government buying its own treasury bonds to flood the market with money that banks could loan and businesses could invest with. The problem is this money was simply printed, it had no inherent value, so inevitably that drives the value of all existing dollars down.

Meanwhile, the Obama administration continues its policy of making domestic oil production as limited, difficult, and expensive as possible. The most recent example was to withhold air permits at the EPA, preventing Shell Oil from drilling off the coast of Alaska. Every time something like this happens, the value of existing oil sources is raised because there's less expectation of competition.

That, combined with unrest in the biggest oil producing countries in the Middle East and North Africa, is pushing the price of oil up in America to the point many expect a gallon of gas to hit $6 a gallon by the end of summer. And while speculators are betting the price of a barrel of gas will be high, they are not the ones driving that fuel price, they're the ones reacting to market pressures and future expectation of the price.

Speculators aren't entirely blameless because when they buy a barrel of fuel for a given price, that becomes the price, but they are not the ones responsible for that higher price.

While President Obama tries to find someone to blame for the price of gas, the truth is, he wants the price to go up, as he's said in the past. His policies are directly pushing the price up, and the only reason he's blaming speculators is that, as George Stephanopolous noted above, this is hurting his poll numbers. That hurts the president's reelection chances in 2012, as Mark Smith writes for the Associated Press.

So the president has to find someone else to blame, even while working to push gas prices up. When President Obama took office, the average price of gas in America was under $2 a gallon, now its pushing up toward $5. And that's the way he likes it.
Posted by Christopher R Taylor at 8:28 AM