SONGS I LIKE: I've Gotta Be Me (Sammy Davis jr)

I'll go it alone, that's how it must be
I can't be right for somebody else
If I'm not right for me 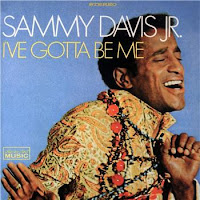 Sammy Davis jr is one of those figures that confuses and amazes people. A black Puerto Rican man who converted to Judaism, a black man in the 50s and 60s who was treated with respect and honor, palling around with some of the biggest figures in show business, people could not work him out. Some called him a sellout, others called him a role model. Sammy was one thing for certain: an entertainer.

Able to sing, speak, act, dance, tell jokes, do impressions (his impressions of the rest of the Rat Pack were eye-watering hilarious), Sammy could do it all, and do it well. He always had class and talent, and blew away the lesser talents around him such as Sinatra. While Sinatra's big showcase song was "My Way," I always liked I Gotta Be Me much better. No only is it less amoral and selfish, the music flows better, and Sammy has such a great voice he just carries the song better.

"I've Gotta Be Me" hit seven weeks at number one on "easy listening" which is a bit of a mischategorization, and hit 11 on the Billboard top 100 chart, in the top 40 for 11 weeks. Originally written for a Broadway musical called Golden Rainbow, Sammy took the song and made it his own, turning it into his personal anthem. Its one of those old songs that builds and has so much energy and power that you are swept along and can't help but enjoy it.

Instead of a song about the end of someone's life and how they figure they did it all pretty great, "I've Gotta Be Me" is nearer the beginning, telling a story of someone who wants to face life without compromise, understanding that you can't live your life to please others. Succeed or fail, at least the singer will be someone they can be proud of without giving up their dream. Sammy started with nothing and found his dream, and this song fits him very well.
Whether I'm right or whether I'm wrong
Whether I find a place in this world or never belong
I gotta be me, I've gotta be me
What else can I be but what I am

I want to live, not merely survive
And I won't give up this dream
Of life that keeps me alive
I gotta be me, I gotta be me
The dream that I see makes me what I am

That far-away prize, a world of success
Is waiting for me if I heed the call
I won't settle down, won't settle for less
As long as there's a chance that I can have it all


*This song is part of the Songs I Like series.
Posted by Christopher R Taylor at 8:37 AM