THE SMELL OF DESPERATION

"Just break into the SEIU office and steal them back!" 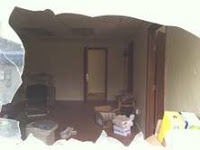 The battle of Wisconsin keeps going on. The latest front was the supreme court election in which the left tried desperately to get a hard left activist judge on the panel to rig all decisions against the state government's efforts to reduce spending and get the state's finances in order. They figured with Kloppenberg on the state's supreme court, they could just challenge every single law and the majority leftist panel would just throw them out.

Well they lost, but the battle goes on. Now the fight for recall elections takes place. Leftists are trying desperately to vote the State Assembly members who have passed several cost cutting bills recalled from office for daring to address the massive state deficit. Meanwhile, the rest of the state is trying to get the assembly members who fled the state to avoid a vote recalled as well. Think about that a bit.

Which of these seems like the more rational position to take? In any case, as the recall petitions go out, the left has been sending protesters to petition signing areas to protect their cowardly allies in the assembly. They've gone so far as to shove petition gatherers, write obscenities on the papers, and tear them up.

Now, when one group says they've gotten enough signatures to set up a recall election for State Senator Dave Hanson (D-Green Bay), one of the "fleebagger" assemblymen, their office was broken into. The petitions were stolen, and the computers taken as well. This isn't going as far as, say, Boss Tweed in New York or some of the leg breakers in 19th century elections, but this is pretty bad for these days.

The left fears democracy so much they flee the state and try to intimidate voters, destroy their opposition's attempts to vote, and even steal to protect their people. This isn't about liberty and democracy for these people, its about power. They see their power slipping away, and will do anything to stop that from happening.

Unfortunately for them, it still appears that they're very much in the minority. The Kloppenberg vote proves that a huge attempt with hundreds of millions of dollars spent, assistance from the President of the United States and dozens of states isn't enough to even win an election against the calm, determined voters of Wisconsin who've finally had enough.

They're losing, and when they lose, that means all those goodies they had to hand out, all the graft, all the gifts, all the power, and all the privileges go away. Because for the leadership of the left - the unions, the Democratic Party, etc - the leadership has almost never been about their stated goals and the needs of the people. Its been about money, power, and personal prestige.

*Thanks to Gateway Pundit for this story.
Posted by Christopher R Taylor at 9:09 AM