PLAYING THE HERO IN WISCONSIN 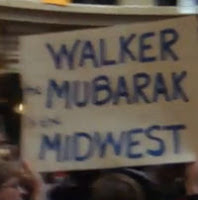 On January 21, 2011, revolts and popular unrest started across Egypt in opposition to the president for life Hosni Mubarak and his oppressive government. As the opposition grew, the world's press became fascinated in the way the revolution started with social networking and spread across the country. Leftists around the world also became fascinated, as revolution tends to appeal to their love of the powerless rising up to defeat the powerful.

By April, the revolution was over; Mubarak had resigned on February 11th and the military had set up a ruling council to restore order. Demonstrations still take place trying to pressure the military government to ensure liberty and democracy, but the revolution had succeeded.

However, February 11th 2011 is when Governor Walker of Wisconsin announced that the state could not survive in the future if the costs of state workers was not reduced, and proposed that state workers pay 17% of their health care benefit costs. He also proposed removing collective bargaining rights from certain aspects of public employee union contract negotiations.

On February 14th, the bill was introduced to the state assembly. Democrats, realizing they lacked the votes to stop this bill, decided that they'd flee the state and hide in a casino in Illinois, thus preventing quorum and stopping the legislation. Among those who hid in Illinois was Democrat state representative Dave Cheatham. Recently, he explained this decision in curious terms:

“I address the idea of showing up vs. not showing up…my wife teaches first grade, this past week one of the kids in her class his dad is getting sent to Afghanistan. And she said well you know your dad’s doing something that’s really good…so he’s leaving, to do something good. And one of the little girls in class..said it’s kind of like Mister Cheatham, he left to make our schools better. And when I heard that, that gave me a reason..”

Now, while I'm skeptical, to say the least, that a 1st grader drew this parallel (at least, without heavy prompting from the teacher) this has been met with no small shock and even contempt by many who heard it. How could anyone think that this is a rational comparison, many wonder.

Many also wonder why it was that such a minor bit of legislation prompted by such a dire need in a state going bankrupt attracted so much attention and excitement on the left. I think I know why both happened.

You need to realize that many on the left view revolution and revolt with a great deal of romance; they see heroism on the part of any who rebel and consider protest and revolution a sort of higher calling. Raised on dreams of the lower classes rising up in rebellion against the ruling classes, viewing life in terms of a political struggle between the oppressed minority and oppressive majority, the left saw wonder and glory in Egypt, the kind they'd not seen since the 1960s.

So when Wisconsin worked in ways to cut spending and save their state, the leftists in unions and around the nation, propelled by starry-eyed dreams of solidarity and brotherhood with Egyptian rebels, saw their chance to play along. That's why Hosni Mubarak and the Egyptian situation were so constantly referred to during the protests in Wisconsin. That's why so many showed up with so much energy. That's why they kept calling Walker a "dictator" who was opposed to Democracy when he was clearly using the democratic process in its clearly intended method and purpose.

And, for Democrats (especially those in leadership) it was a chance to steal back the momentum from the Tea Party and make Republicans look bad, something they couldn't pass up. So Representative Cheatham proposes his heroism for running away and hiding instead of staying in his job and fighting.

It makes sense to them, once you realize the context. It just makes the rest of the country scratch their heads and wonder what on earth they were thinking.

*This originally ran on the Washington Examiner Opinion Zone. Since being posted, the supreme court election for Wisconsin has been held, and the leftists' activist judge choice lost the election. Apparently all that alleged energy and momentum the left claims didn't work out like advertised.
Posted by Christopher R Taylor at 6:57 AM