If you are not a fan of MMOGs and Everquest in particular, this will not likely interest you, but I had to get the ideas down while they were fresh in my mind. It was one of those wake up in the middle of the night then get an inspiration things, hopefully it is as good in the light of day as it was in the night. 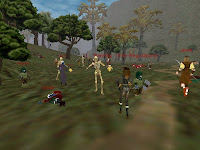 Everquest was started up March 16, 1999. For its time, it was groundbreaking, visionary, and incredible. EQ was the industry standard for a massive multiplayer game and made millions. For years it was the most popular video game on earth, and it established the industry. Now, over a decade later, it looks decidedly aged and clunky. The interface and much of the graphics have been updated but still the game is not especially fresh and up to modern standards. Computers change a lot in 12 years.

Still, the original world was very engaging and well-crafted, and there were many aspects of the game that former EQ players truly loved. I have fond memories of playing Everquest mixed with the grim recollection of how tedious and often painful it was to level. The camping, oh the horror.

THE PITCH
Now, over ten years later, I believe it is time for Everquest to rise again. Reboots are all the rage these days, with Batman, Superman, Spider-Man, Star Trek, James Bond, and other series all getting a reboot. Starting over fresh with a new vision and new technology while retaining the charm of the original concept is something people are comfortable and familiar with. So its time to reboot Everquest.

Naturally after all this time, the graphics would have to be completely redone, and the game engine needs to be built from scratch. Newer, more powerful technology allows games to do things that never would have been possible before. New ideas and concepts in MMOGs have been developed, producing a superior product than Everquest ever could have been in the days of Windows 98. Sound, graphics, speed of processing, and more have all advanced to the point that the game would be a truly new experience.

Yet to be truly Everquest, it would have to retain as much of the old as possible. That means the basic geometry, concepts, storyline, imagery, and as many of the same characters as possible. Sony still owns all these, so Fironia Vie, Fippy, and the bears of Surefall Glade all should return. In fact, the game should look at feel almost identical to the original, but updated so that nostalgia will bring back old players and the wonderful immersion and the inventive, fleshed out world brings in new.
All the old dungeons (with as similar as possible their old layouts) should still be there, the old zones (if bigger and more smoothly rendered), the old cities, names, and locations. I want to go back to Orc Hill and recognize it, I want to fall off a platform in Kelethin, I want to swim in the flying saucer pool in Queynos.

What should be junked is the things that made Everquest a game people left for other competitors. Camping, level loss, shared dungeons, grinding quests, painfully slow leveling, brutally punishing tradeskills, and more all have to be thrown out for a slimmer, more player-friendly game that encourages and rewards rather than punishes and slows.

This project should get as many bright young minds as possible and plug them into the framework of the old, making something new and great out of what was, and rebooting it to be fresh and new for a new generation of MMOG gamers while appealing to the old.

HOW TO DO IT
First off, the initial release should be limited to the original Everquest game. I would fill out all the map (there were quite a few blank spots that later were added in, such as the bulk of Faydwer, and those should be part of the initial release as well), but leave it as much the original release as possible. That means the pirates of Broken Skull Rock should be a part of the game as well, but no Luclin, Kunark, Velious or the other planes and expansions that added new areas to the map.

To that should be wedded the Lost Dungeons of Norrath expansion which by many players is considered the best ever made for Everquest. This expansion added no new areas, but changed the way dungeons were treated and added instanced content to Everquest. Since new technology and player expectations is for instanced content and rewards based on faction and completion of events, this would have to be part of the initial release.

Like the initial game, level 50 ought to be the maximum. For each expansion, I would strongly, strongly suggest at most 5 levels, which would allow more expansion of levels with each expansion to the game without pushing the maximum level to too high a level too swiftly.


WHY A REBOOT IS A GOOD IDEA, NOW
MMOGS make hundreds of millions of dollars a year and have tens of millions of subscribers. World of Warcraft, for instance, has become so mainstreamed it is mentioned in popular culture, news stories, and by politicians. A WoW movie has been in the works for years, and it has saturated all sorts of other media. The idea of a new MMOG is always a winner.

The problem is that the various market niches are already taken by other games. By relaunching a classic rebooted to face a new market with the power of modern systems, Sony has a chance to bring back their biggest property and put it on top again. A reboot of Everquest would present SOE with a chance to return to their best product and present a robust competitor to games such as World of Warcraft.

The use of a reboot means that the product retains customer familiarity and brings with it nostalgia, attracting a ready-made customer base. Most players left Everquest more than five years ago, which means they are past any frustrations they felt and are starting to move to nostalgia and fond memories. Present them with what they loved about EQ without what they disliked, updated with modern power and graphics, and you'll have a winner.

Now is the time to start on this product, and it could easily be finished and launched in 2014; just 15 years after the original release. Since SOE owns all the properties and copyrights of this game, the cost is significantly reduced and the production much easier than taking over an existing franchise or concept such as DC Heroes or Star Wars.

This truly is a golden opportunity for SOE to visit, and a chance to regain a great deal of market share from WoW, which in the eyes of some players is beginning to age.

I have tons of ideas on how to implement this, update the game, and implement newer ideas and technologies, but those will have to wait, as they'd make a 900 page post. For some hints, check out The Return of Grimstaff Theurgist and 5th Generation Massive.

This is absolutely for real, I believe SOE has a golden opportunity here if handled properly.
Posted by Christopher R Taylor at 3:56 PM

a slimmer, more player-friendly game that encourages and rewards rather than punishes and slows

For example, I think they should retain the corpse retreival which was brutal but memorable from Everquest, but there should be more options to avoid it if you can; Clerics should get a summon corpse spell, and you should be able to buy scrolls in town that let you summon your corpse at a fair price.

The idea being that you have an option to get your body back if its at the bottom of Sebilius, but not so easy and cheap that you won't go hunting your body under Kelethin.

And mapping, EQ had no maps or overhead radar - that should still be the way the game is built, but add a cartographer skill that lets you create simple maps of an area (with more complex and detailed ones at higher skill).

That kind of thing; retain most of the feel with changes to help it be less agonizing.

Those would be good changes. Hopefully someone is paying attention.

Background-I played EQ from the start and I still log on occasionally.

I was once one of the to 50 Wizards worldwide (Mangelo) and was a member of two of the top 20 guilds worldwide. I started on Veeshan but transferred to Luclin to play with friends. When I do log in I two box a Necro/Mage duo with pets that are in faction quested raid pet gear provided by a friend in TR. I do not ever log in my old main because I "buried" him when I retired (my whole guild went to WoW and I hated WoW)-he still exists but is "naked", drunk on Dire Wolf Pale Ale and fishing on the shore of the Twilight Sea by the Scarlet Desert.

I find it rather relaxing to go farm Plane of Hate nowdays-the loot/AAXP rock and with the configuration I play and the knowledge I have from many years I can kill just about everything in the zone except Inny.

That being said...apparently you have not played EQ recently. Pretty much all you suggest is now in the game in one form or another. There are no real corpse runs anymore unless you want to do it the old fashioned way-you can get your corpse in the guild hall. You don't need a wizzie/druid to port anymore-you buy a port stone and use the porter in the guild hall. The quests they have now give great XP and actual useful gear. The new starting zones ROCK! They have mercenaries so you can have a "rent a cleric" or a "rent a tank" which makes life a bit easier for those classes who never get picked for groups or if you just want to solo a bit. Druids have rezzes now. The only way you can really lose a level is if you are totally stupid or you want to delevel.

TBH The only way I ever lost a level was in some really tough raids. Except for that one time we were farming Othmirs in CS and I was leveling my Druid alt with our farm team-I bound her unknowingly at a static spawn point (everything in the zone was red to her except two mobs). Then we went over to Maiden's Eye and zoned right into a train-SPLAT! and into a death loop I went. It was one of the most fun days we had trying to get her out of the death spiral. Then there was that time in PoF when we were rescuing another guild that wiped in there....Ah, good times, good times!

Some of the zones have new graphics-North Ro/Oasis/South Ro are now one big zone, Lavastorm has been revamped, Freeport has been redone, PoK/The Bazaar/Nexus are different, etc.