"All they intended was to use the name Earthsea, and some of the scenes from the books, in a generic McMagic movie with a meaningless plot based on sex and violence." 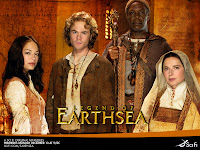 I'm trying to become a successful novelist. So far I've only managed to get one book published and not many sold, but its a long road from what I understand. Should I make it to the point I can make a modest living out of writing and selling books, I will have achieved my goal. Somewhere along the line, its possible I could reach the kind of success where someone decides they want to put one of my books out as a movie.

From where I sit right now, I would have to decline. I expect that if someone offered me six figures for film rights I might change my mind, but I probably would not. The problem is that film and TV guys have a very different idea on how to tell a story and what needs to be done than writers.

In some ways they're right; some things don't translate well to the screen that work well in books. Books tend to be significantly longer than movies, and something has to be cut out. And telling a story in print is different than telling a story on the screen. And I'll even concede that the audience for a book is different than the audience for a film, so some things have to change.

The problem is that they go further than that. Ursula K Leguin wrote a few years back about the travesty that was put out on the Sy Fy channel where they've changed the name to match the fact that they have little to do with either science or fiction.

When I sold the rights to Earthsea a few years ago, my contract gave me the standard status of "consultant"—which means whatever the producers want it to mean, almost always little or nothing. My agency could not improve this clause. But the purchasers talked as though they genuinely meant to respect the books and to ask for my input when planning the film.

...I hoped they were making no unnecessary changes in the plot or to the characters—a dangerous thing to do, since the books have been known to millions of people for decades. They replied that the TV audience is much larger, and entirely different, and would be unlikely to care about changes to the books' story and characters.

They then sent me several versions of the script—and told me that shooting had already begun. I had been cut out of the process.

The director and publisher had entirely different ideas about the characters, the setting, the philosophy of the movies, the plot, just about everything but a few names. LeGuin spends a lot of time carping about the appearance of the characters which seems bizarrely incidental for a book, I never even cared what they looked like when I read the series. But her experience otherwise is not unusual and was sad because of what could have been done.
I've said this before many times, but it baffles me that someone wants to take a best-selling, extremely popular, respected, and well-written story and turn it into something very different. Why did you want the story to begin with, if you're just going to tear it to pieces and make your own?

Even a really high end production with the most respected and best-selling fantasy series in the world with the Lord of the Rings ended up violating the story in several key places. Its one thing to say "well there's no strong character to draw in female viewers" (a fallacy Hollywood often stumbles over) and blend two female characters together to build another one. I could live with leaving out the Tom Bombadil sequence; some things have to be cut out just for the sake of time. I can even put up with the added apocryphal love scenes between Aragorn and Arwen, despite their lengthening of the film.

But having Faramir try to take the ring, having the Ents unaware of their forest being hacked and burnt down, having Frodo try to hand the ring to a Nazgul who gets chased off by a few guys with swords?? It went on and on, particularly in the second movie, almost like a series of kicks to the belly - or lower - to a fan of the books.

Then the final movie comes, and instead of the extremely entertaining and important final portion of the books, the scouring of the shire, they filmed a 45 minute "goodbye" sequence that was simply interminable and seemed to end several times, but then kept going like some kind of practical joke. If you're so worried about time you hack parts of the book out, why did you add more and more and more content to the movie?

The truth is, if you're an unknown writer with a new, somewhat popular product, you will not see your book given even remotely respectful treatment. You have zero leverage to get any script control, no production input, and no power at all. They'll guarantee anything you want to get that movie deal going, but when it comes time to make the film, you're just a writer and who needs you anyway?

So I just don't want to go through that. I don't want to see someone make their version of a movie based vaguely on the title and a few names from my book. Thankfully there's such a miniscule chance of that ever coming up I won't have to deal with it. I just hope I can sell enough books to survive some day.
/div>
Posted by Christopher R Taylor at 8:28 AM

Looking forward to the upcoming Game Of Thrones series. It appears they have attempted to do justice to the books (I've only read the first one, but it is probably the only fantasy novel I've read in a decade, and I really enjoyed it).

Interested to see what happens with the Atlas Shrugged movie as well. I have not been teribly impressed with the scenes that have been released so far. They took a lot of the philosophy out of it, which is understandable for entertainment value, but without the philosophy I fear the movie will just come off as a soap opera about uber-wealthy corporate executives. We'll see, though. It seems they went through great pains to keep Hollywood's hands off the production as much as possible, so that, at leat, is promising.

CT is not a big fan of Game of Thrones, I totally am and am really looking forward to it.

On the other hand I have no interest in Atlas Shrugged. I found the book boring and the movie just makes me think. "bleh"

You might have to go the Mel Gibson route, and fund the entire thing yourself. That's probably the only way you can guarantee control over the final product. But I guess you'll have to sell a lot of books first!

"but it baffles me that someone wants to take a best-selling, extremely popular, respected, and well-written story and turn it into something very different."

The reason Hollywood does what it does is because "adapting a book" is just the code phrase for "hijacking a title that's already enjoyed a gazillion dollars' worth of free advertising."

LOR is an outlier, though, in that it was a labor of love for Jackson and Boyer, but even they couldn't free themselves from that damned Hollywood Film School practice of inventing points of conflict at the expense of fidelity to plot and character.

I imagine the reasons for the Hollywood approach are legion (or Legion - heh). I take it for granted that topping the list is the assumption - validated by taking note of what sells tickets - that the average audience member is a drooling idiot that lacks the ability or patience to appreciate anything more nuanced than, say, a song by the Sex Pistols.