NO BROWN BAG FOR YOU

"when they bring the food from home, there is no control over the food." 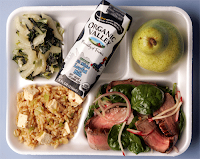 Mission creep is a term that describes when a plan begins to take on new goals and directions as time goes on. For example, originally the Sierra Club was founded to protect the Sierra Nevada mountain range from misuse and destruction, but by now its goal has expanded to protect any and all environmental areas, natural resources, and animals.

Schools originally started out as a place to learn basic skills and facts to better face life. Learning mathematics, history, geography, language, and other rudimentary educational skills was the focus. Over time, that mission began to creep into other areas, such as social interaction, becoming an ideal citizen, and fighting social ills. One such area of mission creep is the school lunch.

Schools began providing lunches in the 1930s during the depression out of concerns for malnourished children and the inability of parents to provide sufficient nutrition for their children. The first school lunch programs were started in urban areas for poor children and were very limited. As time went on, the lunch system became larger, more common, and more inclusive.

Under FDR, the Federal Government used the War Food Administration to help schools set up lunch programs and by 1946 the National School Lunch Program was helping lower income students pay for lunches. From basic education, now schools were in the food service business.

In 1966 an experimental program for school breakfasts started as well, under the theory that poor families were or could not providing food for children in the morning. Again this primarily started in urban areas, but by 1975 the program became permanent, and in the 2009-2010 school year, it had expanded to 87% of all schools that provide lunches, feeding 11.3 million children in almost 90,000 schools. And still the mission creep went on.

And now, out of Chicago we learn that at least one school refuses to allow anyone but them to feed children lunch. The Little Village Academy is an elementary school which has banned the lunch pail. At this school, all children must eat meals served them by the school and cannot bring food from home. Monica Eng and Joel Hood report at the Chicago Tribune:

Principal Elsa Carmona said her intention is to protect students from their own unhealthful food choices. "Nutrition wise, it is better for the children to eat at the school," Carmona said. "It's about the nutrition and the excellent quality food that they are able to serve (in the lunchroom). It's milk versus a Coke. But with allergies and any medical issue, of course, we would make an exception." Carmona said she created the policy six years ago after watching students bring "bottles of soda and flaming hot chips" on field trips for their lunch. Although she would not name any other schools that employ such practices, she said it was fairly common.

A Chicago schools official implied that other schools follow the same policy in Chicago, refusing to state are like Little Village Academy. Here we see one more step by the schools to go beyond their original mission of education to cover more and more of children's' lives. In this case, education has nothing to do with the justification, it is simply a decision by school administrators that they wanted to make sure kids ate more healthy meals.

From an initial and justified concern of children's education, schools have incrementally, step by step taken more and more control over children and away from parents to the point that now in some Chicago schools at least, feeding children has been taken away. It is cheaper to feed kids with food you buy in bulk and build in lunches than to buy school lunches, yet in this case the concern for the poor - and, judging from the names in the Tribune article - Hispanic culture is trumped by a need to feed kids food judged to be "healthful."

It is the parent's duty and job to educate children, but they often voluntarily delegate this to better trained professionals in schools. However, it is always a parent's duty to feed children, and while some may delegate this to others because they do not have time or inclination to do so, to have schools mandate that they must give up feeding children lunch is a mission creep too far.

Incidentally, the Little Village Academy was one school that was covered by the Chicago Annenberg Challenge administrated by Barack Obama, a position Bill Ayers got him. Since all that money was spent its been very difficult to obtain records of the challenge and what it accomplished despite allegedly being public record, but Chicago's schools have steadily gotten worse test scores for decades. Seventeen of the top 100 worst schools in America, including four in the top worst 20, are in Chicago area.

It seems to me that even if you could somehow justify controlling what kids eat at school to this degree, these schools would want to first develop better education before even considering the food their students get. But since all the same business (Chartwell's) provides all the food for these schools, its certainly in their best interest to prevent parents from competing with a lunchbox or paper sack. I wonder if someone dug deeper how many connections they'd find between that company and administrators at schools?

*This originally ran in a slightly shorter version at the Washington Examiner Opinion Zone.
Posted by Christopher R Taylor at 7:49 AM