Over the border there lies the promised land
Where everything comes easy you just hold out your hand
-Phil Collins, Illegal Alien 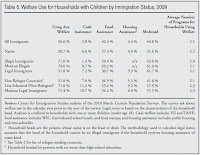 President Obama is making noises about immigration again, a sure sign the next election season is gearing up. Every election both parties try to pander to the largest minority block in America - Hispanics - to get their votes.

Meanwhile, the rest of the nation - including most legal immigrants - want something done to stop this flood, now. There's an email that goes around regularly with lots of stats in it, but many of the stats are either misleading, lump legal and illegal immigration together, or are wild estimates because its very hard to get hard data on people deliberately avoiding the law. This is complicated by the refusal of many law enforcement departments to look into immigration status and how nobody really wants to do any hard studies on illegals.

However, there was some information I was able to dig up based on the email:
Meanwhile, hard working, good families of skilled workers cannot get into America legally because the system is so slow, expensive, and complicated. Clearly, the US can support a larger number of immigrants than the official system is capable of handling. We know this because millions more than the officially allowed number enter the nation illegally and we haven't collapsed under the weight of immigration (yet).

Clearly, the system is broken to an astonishing, ghastly extent. Blanket amnesty to make illegals in America legal would be very expensive, because they aren't taking as much advantage of government services as they might out of fear of being caught and the difficulty in getting fake IDs. Plus, most of them I suspect prefer not to defraud the US, they just are looking for a place to live and work that's better than their homelands. The Center for Immigration Studies estimates:

If illegal aliens were given amnesty and began to pay taxes and use services like households headed by legal immigrants with the same education levels, the estimated annual net fiscal deficit would increase from $2,700 per household to nearly $7,700, for a total net cost of $29 billion.

Although legalization would increase average tax payments by 77 percent, average costs would rise by 118 percent.

Overall, the total cost and impact of having millions of illegals move across the border without much hindrance at all each year (back and forth) is not totally clear yet, but what we know isn't good.

Like the cost of health care in the United States, this is an issue most people want fixed. The problem is every time congress brings up what they'd do to fix the problem the solution as bad or worse, just like health care.

Illegal immigration has actually reduced and most estimate that illegals have left the US in larger numbers recently because the economy is bad enough there isn't work for them. That puts to lie the "we can't deport families and people because they are such a part of our social fabric!" argument, but it also points out that economic pressure is a powerful tool.

President Obama has made a big show of nailing businesses which hire illegals but he does nothing about the illegals, just the businesses. In other words, he's using this as a money maker and a way to kick businesses in the teeth, not a way to address immigration. If both were done, if both businesses were punished for hiring illegals and the illegals were deported, then we'd have some real impact on illegal immigration.

Yet without streamlining, cheapening, and widening the system for immigrants to get in the US, its not enough to just lessen illegal immigration. We want immigrants in the US, that's where most of us came from and we welcome the influx of ideas, language, food, customs, music, and so on. As I've written about before, much of the Latin culture (where most illegals come from) is positive for the US. We want quality immigrants to have an easier time getting into the country.

And if you make the system easier to take advantage of, then there's less incentive to cross the border illegally. Combine that with a tougher border crossing and strictly enforced immigration status examination like Arizona has started to push for, and you'd see a real dent in the illegal immigration problem the US faces.

Instead, all we get is offers of amnesty, talk of fences, rhetoric about racism, red herrings about "taking our jobs" (nobody is arguing that, except comedians and leftists who attempt to mock it), and politicians trying to take advantage of the argument for personal gain. Simple, common sense solutions always seem to be shoved aside because they won't fit anyone's agenda.
Posted by Christopher R Taylor at 7:42 AM

leticia olalia morales of 15501 pasadena ave #8 tustin ca 92780 submitted fake documents and paid 5000.00 dollars to obtain a US tourist visa. she is now applying for citizenship.