FREE SPEECH IN A TIME OF WAR

"You have not converted a man because you have silenced him."
-John Morley 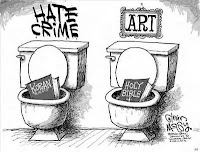 Recently, Senator Lindsay Graham (R-SC) made a statement about the recent Koran burning by pastor Terry Jones. He said "I wish we could find a way to hold people accountable. Free speech is a great idea, but we’re in a war"

Meanwhile Senator Reid (D-NV) suggested that a congressional probe into Pastor Jones' stunt may be coming. Since several hundred people have been killed in Afghanistan by rioting Muslims enraged at Pastor Jones' act, prompting General Patraeus to criticize the pastor's actions, and many expect President Obama to apologize.

It is true that the free expression of our rights has to be slightly curtailed by war, that's why the founding fathers feared war. For example, Jefferson once said:

"If we are forced into war, we must give up political differences of opinion and unite as one man to defend our country. But whether at the close of such a war, we should be as free as we are now, God knows. In fine, if war takes place, republicanism has everything to fear."

As the first Democrat to become president of the United States, Jefferson had a slightly different perspective on the topic than most modern Democrats.

We have a responsibility during wartime to be more careful about what we do and say, to help make the war time era shorter, less awful, and more controlled.

That's why I think the gleeful printing of classified information and the flood of bad news about the war during the Bush administration was destructive and should have been curtailed by the press, voluntarily and the government if they would not. Men died and the war effort was greatly harmed by leaks in the press revealing tactics and efforts used to capture and defeat terrorists.

All of us have limits on the free expression of our rights, as I've written about before, and most of those limits should be based on our sense of responsibility and honor. However, there is a time when the government must step in and limit our free expression; that's why we have laws against libel, for instance.

That said, Senators Graham and Reid are just flat wrong. This publicity- and money- seeking pastor should have never done this, but he has to be free to do this in order to have liberty at all. The entire point of free speech is to protect expression we do not care for, no one would need the constitution to protect speech we all admire. Taking an action which is at best rude and disrespectful is not sufficient cause for government intervention.

To put it simply, Pastor Jones has the right to be a jerk in the United States, and that's the price of having a multicultural, tolerant society. For over two centuries, the principle of freedom of speech has allowed some pretty reprehensible things to be said and done, because as a nation we understand that it costs us more in liberty to shut down what we do not care to hear and see than it costs us to allow it.

For Graham and Reid, both legislators, the temptation to come up with yet another legal solution and get the government involved is powerful. Yet for a free society to function, its members have to limit and govern themselves as much as possible, and have laws to prevent their ill behavior as little as possible.

The idiotic and murderous, but all-too-predictable reaction of these extremist Muslims over his act should have compelled Pastor Jones to restrain himself, not government or law.

*This originally ran on the Washington Examiner Opinion Zone.
Posted by Christopher R Taylor at 7:39 AM

If Harry investigates Jones, do you think anyone will mention the riots caused by Newsweek lying about that koran being flushed in Gitmo?