"Do what you're told, and everything will be all right." 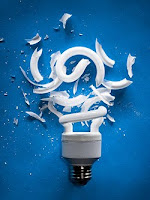 Some people have started hoarding old style incandescent bulbs. They are cheap and fragile, but they work well and put out a lot of light, which really is the point of a light bulb to begin with. The reason for hoarding is that some governments have started to ban the old style incandescent bulbs in favor of newer, lower-energy models such as LED and Compact Fluorescent Lightbulbs (CFLs).

For example, in the US, President Bush signed a bill in 2007 that raises energy efficiency requirements of incandescent light bulbs beyond what the can reasonably achieve by 2014, effectively banning them. Other nations such as Australia, Argentina, Canada, and Russia all have similar bans taking effect over the next few years.

Setting aside the constitutionality of the US federal government telling you what light bulbs you can and cannot use, there are some other problems with this scheme. CFLs are the most commonly promoted substitute for the old light bulb, and the latest models even look like the old reliable globe. Yet even their strongest promoters admit there are drawbacks to these bulbs.

Unlike the old incandescent bulbs which had a vacuum inside, CFLs are filled with toxic gasses, including several milligrams of mercury. They cannot be disposed of in the usual manner, and most suggest you return them to the manufacturer.

CFLs do not put out the equivalent light level the packaging claims, and although they supposedly last longer, many have found that to not be the case. Especially in older homes with less stable wiring these bulbs can last no longer than the old style ones. The design of these bulbs works best in situations you leave them on longer periods of time; they are poor for things like refrigerator lights, for instance.

CFLs do not work well outdoors in most places. When the weather is very cool, the bulbs tend to put out less light, and they are poor for bright, focused light, working best as ambient lighting in a room. Most do not work well with dimmer switches and many take some time to reach their full light levels. And finally, they are shaped differently and might not work well in older light fixtures.

However, there is some more alarming news out of Germany that makes CFLs even more troubling. Welt Online reports (in German) that at least some models emit toxic, cancer-causing gasses while in operation.

Energy saving light bulbs can emit what appear to toxic substances while in operation. The NDR consumer and business magazine "Markt" reports that lights then converts vapors that are believed to be carcinogenic.

The magazine evaluated a sample of energy-saving lamps from different manufacturers in a certified laboratory. All lamps showed clearly measurable amounts of phenol and other toxic substances.

How serious this risk is and how much the total amount of toxic, carcinogenic gasses are is unclear, as scientists can measure incredibly minute amounts. What we do know is that the old incandescent bulb released no such gasses and put out better, more reliable light. It seems like the more we learn about these things the worse they get.

LEDs seem to offer a better solution, but they are even more expensive than CFLs and have their own drawbacks. The sad thing is that in the name of saving us all from some future doom, world governments are actually making life worse for us all and in the process possibly exposing us to even greater immediate health risks.

Its funny how so often someone claims to be doing something "green" it ends up being worse for us in the long run. Maybe if the government backed off and let the market do its job, we'd find what worked best for us.

Certainly the federal government has no constitutional power to tell us what light bulbs we can and cannot use. This is just one more in a long line of failed, obnoxious regulations imposed on the rest of us by a government that's gotten too big for its own good. The only question is when we as a nation will finally deal with the people who keep doing this?

*This originally ran at the Washington Examiner Opinion Zone in a heavily edited version.
Posted by Christopher R Taylor at 7:35 AM

It's a strange world that would ban the simple safe versatile cheap incandescent light bulb, given the problem of CFLs with radiation and mercury concerns, LEDs with lead and arsenic concerns
(The temporarily allowed Halogen replacement incandescents still being different and costing much more)


Light bulb regulations give less than 1% in overall US energy savings
( ceolas.net/#li171ax )
Much greater and more relevant savings of actual “energy waste” comes from power plant and grid changes, and from preventing the unnecessary usage of products eg night lighting in buildings,
than from preventing the personal choices of the products that people want to use.