"The aim of public education is not to spread enlightenment at all; it is simply to reduce as many individuals as possible to the same safe level, to breed a standard citizenry, to put down dissent and originality"
-Henry Louis Mencken

When Senator Rand Paul (R-KY) revealed a 5-year plan to reduce the federal deficit, it included the total elimination of four federal departments, including the department of education. Paul claims that the plan would result in budget surpluses by 2016 which could be then applied to the debt, while his opponents called it "extreme," "draconian," and "crazy."

Yet would eliminating the Department of Education (D0E) really be that horrible for the future of our youth and education in America? The DoE was established by President Carter in 1979 and became active in 1980. In that time, the spending on public education by the federal government has seen a continuous, rapid increase while test scores have shown either no growth or have gotten worse.

In 1980, the Department of Education's budget was $20 billion. This year it is almost $90 billion. Over the last thirty years of the DoE's existence, spending adjusted for inflation has doubled for public education. Since the 1960s the US Government has spent more than a trillion dollars on education. Between 1972 and 1992, the combined math and verbal scores on the Scholastic Aptitude Test (SAT) fell from an average of 937 to 899.

Andrew Coulson at the CATO Institute provides the shocking proof in graph form: 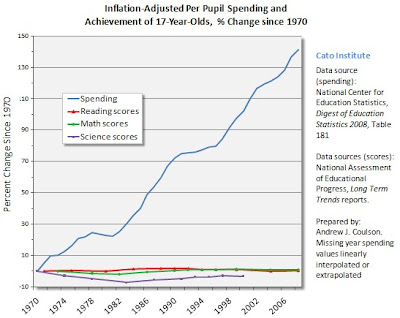 Recently, President Obama's Secretary of Education reported to congress than 82% of the public schools in the United States were failing under the standards of the No Child Left Behind plan. Sam Dillon writes in the New York Times:

If Mr. Duncan’s estimates prove to be right when state exams are given this spring, they will represent an astonishing jump in the number of schools falling short of the law’s requirements.

Clearly, the spending and the department are both failing to achieve their goals of superior education. In other words, cutting a failed, vastly expensive department is not extreme, crazy, or draconian, it is eminently logical and proper when tackling a federal budget of over 3 trillion dollars.

Even if the Department of Education was showing some degree of success, the fact is the US Constitution grants congress no authority over education in the states, and as the nation plunges into astoundingly deeper and deeper debt, we just cannot afford the DoE these days. It has been a failure in bringing better education to students, it has cost hundreds of billions of dollars, and it is time for that department to be ended. For the children.

For more thoughts on what should be done to improve education, check out my essays on the topic. This originally ran on the Washington Examiner Opinion Zone.
Posted by Christopher R Taylor at 7:07 AM

As a parent with a child in public school, one of the biggest problems I am seeing these days is the mainstreaming of kids with mental/emotional/social disabilites. Once upon a time these kids were segregated into different classrooms. Now, not only are they in the mainstream classroom, but teachers are tasked with the impossible goal of preventing them from falling behind the other kids in the class. The result is that even the precious few GOOD teachers we have spend an inordinate amount of time dealing with these kids.

It is becoming increasingly common to see parents lining up to try to get their kid tagged with some kind of (often suspicious) disability, because they then can be put on an Individual Educational Program which makes it almost impossible for the teacher to give them a failing grade. Meanwhile, in China or India or even Mexico, parents are trying to prevent their kids from being tagged with learning disabilities becasue it means they will be removed from the mainstream classroom... imagine that.