ELECTIONS IN THE GREAT WHITE NORTH 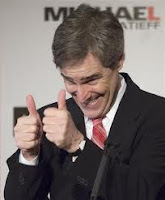 While the US has been busy fighting over the first federal budget in 3 years, Canada has been having its own political battle take place. In 20008, Steven Harper managed to build a coalition of parties for his Conservative Party to take over. Although a minority, the Conservative Party is the largest minority in the Canadian parliament, and as such has the most power.

However, recently, the parliament voted no confidence in the Prime Minister, and found him in contempt of parliament. This effort was led by the Liberal Party (their parties are named a bit more literally in Canada), who accused the Prime Minister of withholding information on the new F-35 fighter jet, corporate tax cuts, and anti-crime legislation.

Whether or not any of this has any validity, the no confidence vote means that another election must be held to determine if the Canadian people prefer the Conservative Party in power or want a change. Initial polling indicates that the Conservatives still would likely win the largest minority again, but the Liberals hope to build a more powerful coalition.

Harper's main competition for the Prime Minister job is Michael Ignatieff, or "Iggy." Ignatieff has been a leftist leader in Canada for some time now, and hopes to topple Harper and return Canada to hard left leadership again, a tradition for decades in the nation.

Ignatieff has gotten into trouble lately, however. Brian Lilley at the Toronto Sun reports that Iggy once claimed to be an American:

"I am an American Democrat. I will vote for Kerry in November," Ignatieff told The Glasgow Herald in 2004.

Ignatieff, a professor at Harvard at the time, was defending his record as a human rights advocate against charges that he had become a neo-conservative who backed then-president George W. Bush in the Iraq war. Ignatieff and some other left-leaning intellectuals supported Bush in the early days of the war.

Ignatieff also has been linked several times to Quebec separatist movements within the Liberal party, although he now repudiates the idea.

Now Ignatieff claims he never voted in the US, let alone for Kerry, although it wouldn't surprise me if at least a few Canadians did. The 2004 election was very contentious, with nations such as England and Canada trying to get Americans to vote for Kerry instead of Bush. The most famous (and counterproductive) of these appeals was The Guardian's letter writing campaign to try to sway American voters.

In America, such a discovery would likely doom a candidate, as Americans tend to view outside influence and politicians with divided loyalties in a very disapproving light. How the Canadian people, who are usually more forgiving and relaxed, will take this remains to be seen.

As Canada holds its elections, the world is watching yet another battle between right and left, as Harper tries to cut taxes and spending, while the left tries to stop him. How this ends up will determine the future of Canada, and may help indicate an overall mood in the world when it comes to spending and debt.
Posted by Christopher R Taylor at 2:18 PM

Hmmm, there are a few subtleties this Canuck should point out:

Of the 308 seats in the House of Commons, the greatest number are held by the Conservatives, which is why they are the governing party. However, they do not hold more than half of the seats (i.e. 155 or more), which is why it is called a minority government. Since they don't have enough votes to ram through legislation, as would be the case in a majority government, the Conservatives have to negotiate with one or more of the opposition parties to get enough votes. It has been this way since January 2006.

Now we are again in an election campaign, because the opposition parties voted no-confidence on the latest budget (some bills, such as budgets, are always confidence votes). Once again the Conservatives are hoping to get a majority government, which will enable them to pass legislation such as canceling the funding of political parties from the public purse -- something the opposition parties are very much against.

Michael Ignatieff's voting record in the US is unclear -- he stated that he would vote for Kerry, but claims he never actually did vote. On the other hand, he very definitely did vote in England in 1997 while he lived there, so his recent claim that he has never voted anywhere but in Canada is hard to believe. Other problems with his story include claims that his family were poor immigrants from Russia (in fact, his grandfather was a high government official in the Czar's court, and when his family fled to England after the 1917 revolution they arrived with plenty of money). Ignatieff is actually a Russian count, by blood!

One more point about Canada: when you listen to political ads put out by the Liberals and especially the NDP, the use of "American-style" is considered a Very Bad Thing (tm), as in "the Conservatives want to turn our health-care system into an American-style profit-driven windfall for evil nasty corporations!" There is a lot of anti-American sentiment in southern Ontario and Quebec, possibly dating back to loyalists who fled after 1776. Out here in Alberta we like Americans just fine, particularly since you buy so much of our oil.