*Since this was originally written and posted on Washington Examiner Opinion Zone, President Obama has finally publicly posted his birth certificate, answering all but the most radical conspiracy theorist. Still, the information in it is useful and helps answer the racist charge. 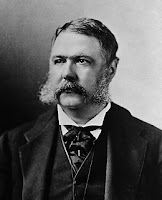 Pop quiz. What do Chester A Arther, Barry Goldwater, George W Bush, George Romney, Barack Obama, John McCain, and Franklin D Roosevelt Jr all have in common? Yes, they're all politicians, and yes, they are all American men.

The other thing they all have in common is that they've all had their birth places challenged during elections.

Chester A Arthur was on the ticket with James Garfield as Vice President when he was accused of not being a natural born US Citizen. Opponents charged that Arthur had been born in Canada, not the US. The rumor still persists to this day, with charges that Arthur had all records of his past burnt and destroyed when he became president after Garfield was assassinated.

Like Arthur, Roosevelt had the same charge arise, but in this case it was true - he was born in Canada. However, his parents were both US Citizens and had not renounced their citizenship.

Similar to Roosevelt's situation was George Romney who ran for president in 1968. His parents, still US Citizens, had George while living in Mexico.

John McCain's eligibility for presidency came up in 2008, the same time as Barack Obama's because McCain was born in Panama, but it was on US soil because he was born in a US Military base.

Barry Goldwater's case was a bit more curious. He was born in Arizona Territory before it was a state, and when he ran for president in 1964 some said that meant he had not been born in the United States, since Arizona wasn't a state then.

Even George W Bush faced charges that he'd falsified campaign information in 1978 when it listed his birth then said he was raised in Texas without mentioning he'd been born in New Haven Connecticut.

And, of course, Barack Obama's birthplace was contested by the Clinton team during the 2008 election and is in the news again because of Donald Trump.

Why bring this up? If you're like me you probably didn't care much about this situation to begin with, and are kind of tired of it by now. I am certain President Obama was born in the USA, as I'm certain most if not all of you are.

However, when this subject comes up, usually someone cries racist. When Donald Trump was on The View, Whoopi Goldberg quipped, "I think that’s the biggest pile of dog mess I’ve heard in ages, it’s not because he’s black, is it?" The reason this comes up is that they figure the only reason anyone is even questioning the citizenship of President Obama is that his name is unusual and his skin is darker in hue.

None of those other politicians above could be accused of being anything but white or of having "funny names." In other words, this isn't a race issue, it is an issue that comes up every so often when it comes to seeking the most powerful job on earth. Politics are like that, people are looking for every advantage they can and any way they can to make their opponent look bad. This isn't a race issue, its just politics as usual.
Posted by Christopher R Taylor at 7:23 AM