"when faith collides with faith, there's no recourse to reason. The only thing you can resort to is force." 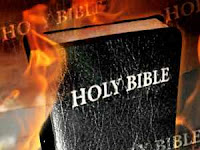 As a Christian I had to comment on a recent event at Hardball with Chris "thrill up my leg over Obama" Matthews. On the show there was a discussion between F. Chuck Todd and Bobby Ghosh, both employees of Time Magazine. It went like this (transcript courtesy Mediaite, who has video):

GHOSH: The thing to keep in mind that`s very important here is that the Koran to Muslims, it is not — it is not the same as the Bible to Christians.

That makes it sacred in a way that it`s hard to understand if you`re not Muslim. So the act of burning a Koran is much more — potentially much, much more inflammatory than –

Now, some people have been outraged and upset by this or just mocked it, and there's reason to mock, but the outrage is a bit misplaced. He is not saying the Koran is superior to the Bible in this exchange, and I suspect that Time Magazine workers in general consider both to be idiotic fairy tales. He isn't saying its okay to burn a Bible and not a Koran. He's just misrepresenting the beliefs of Christianity.

I do not know Mr Ghosh's faith but I suspect either he personally is or he knows and is in contact with Muslims. Because he is representing a fairly accurate statement of Muslim belief about the Koran.

There's an intermediary that he doesn't mention; according to Islamic teaching, angels spoke to Muhammad (and one devil, as Salman Rushdie wrote about, in a passage later deleted), because God doesn't care enough about humans and will not deign to speak to them personally, but the book is said to be the direct word of Allah.

Where Ghosh is mistaken is when he talks about the Bible.
Ghosh is expressing the position of modern liberal theology; that the Bible was written by men and contains portions which are edifying and true. Christianity teaches this differently, but it takes some explanation to make sense.

Orthodox Christian teaching goes like this: the Bible is the direct word of God, spoken into the soul and mind of the writers, who then wrote what they were inspired to as guided by the Holy Spirit but with their own genius, style, and personal ability. So we have beautiful imagery and poetry by some writers, more direct logic by others, and historical recitation by still others. The process was not dictation but more a cooperative effort with God making sure what he wanted to get across was written properly, but the writer given free reign to put it in their own way.

Where Muslims vary from Christians isn't their reverence for the content of the Bible, but reverence for its physical form. Christians believe that the contents of the Bible are God's word, but the book is just a book, if one we tend to revere and care for particularly because of its content. Burning a Bible is not cause for murderous rage; mostly it is cause for sadness, prayer, and sorrow for the person burning it.

There have been times when some Christians were so ignorant and obsessed with the Bible as a physical book that they would kill over it, but the Bible its self does not support any such thing and opposes murdering over a book burning. There are still Christians today who believe a Bible should be shown such reverence that it is to be handled very carefully, even some who believe it shouldn't be written in or highlighted (mine looks like a highlighter blew up in it, but I don't write in it).

The problem here is one of contact and ignorance. Ghosh, like most reporters, has little to no contact with actual Christians - and what little contact he has is likely very liberal Christians who tend to think large portions of the Bible are mythical and faith is about what you take from the book, not what it teaches. By contrast, after 9/11 news outlets began a conscious, deliberate effort to get more Muslim contact and even writers in their business.

You can see the bylines change after 9/11 with fewer Tom Jones and more Ismael Khalidis writing for the papers. When the terrorists hit the US, news companies decided they needed more Muslim input to understand better what was happening and to get their perspective.

So today, Time Magazine writers and editors have far more contact with Islamic faith than Christian. And we get exchanges like the one above, which is inexcusably ignorant in a country which claims to be almost 80% Christian.

As for Ghosh himself, he's infamous for writing up a story about a massacre in Haditha that were demonstrated to have been proper action against armed insurgents. Ghosh wrote it up as a the next Mai Lai, and Senator Murtha ran with it for months, slandering soldiers and damaging morale while prompting murderous action in Iraq by terrorists.

And, as Rush Limbaugh points out, In 2009, the US Military confiscated and burned Bibles that a Christian group sent troops. UPI Reported then:

Lt. Col. Mark Wright said the Bibles printed in the two most common Afghan languages were seized on arrival at Bagram Air Base because U.S. military rules forbid troops from proselytizing.

"The decision was made that it was a 'force protection' measure to throw them away, because, if they did get out, it could be perceived by Afghans that the U.S. government or the U.S. military was trying to convert Muslims," Wright told CNN.

Having troops spread Christianity in Afghanistan would hardly hurt the place in the long run, but it would make their job significantly more challenging, and this was done in response to an Al'Jazeera report that troops were proselytizing locals.

When this took place, Christians did not riot, kill, burn, or break things. In fact it wasn't even very widely reported by the legacy media.

Incidentally, what do I think of Pastor Jones' act? It was a rude, pointless, counterproductive stunt meant to bring him greater publicity and money and was further in direct contradiction to Christian teaching by Paul and other apostles on behavior that is winsome, good, and pleasing to God.
Posted by Christopher R Taylor at 8:50 AM

You argued this very nicely. I would have probably said that the difference is the Christians are a little more rational then the typical Muslim and are not going to go bonkers over a few pieces of paper wrapped in a leather cover being burned. It isn't like it was or will be the last Koran on earth. It can be and will be reprinted. Probably in a nice 'Chicken Soup for the Muslim soul' version.

This is a good & easy-to-understand approximation of what many Christians mean when speaking of the Holy Bible as the inspired Word of God. I am sure it is difficult from nonbelievers to understand how rational the process really is.

As to burning the Bible - that is an outrage at any time or place, but the 10 commandments forbids idolatry, and we do not idolize it, but treasure it.

I remember when the military did this. The symbolic effect of burning Christian Bibles in Afghanistan was surely intentional, driven as much by anti-christian elements within our leadership as by appeasement of whomever we were courting at the time. But it probably has fueled the enemy, who thus gained insight into the sour expediency of our political class.

How dare our Generals and Commanders refuse to uphold the basic principles of our own Constitutional society when they are ostensibly at war in defense of those very principles. How dare they prevent our military from exercising the most primary commandment of Christianity: "Go into all the world and preach the gospel to every creature."

Did Christians, did any Americans - whose entire culture is absolutely derived from Judeo-Christian living - riot over this outrage committed by our own government?

No. One man burned one Koran in Florida, but otherwise the media didn't report any protests from the Western world.

For most Christians, it is in God's hands and we must shake the dust off our feet. That same Bible tells us that "Vengence is the Lord's", and that Christ Jesus said "Put your sword back in its place" when Peter defended him against arrest.

But that does not mean we should allow it to continue to happen.

I am grateful that Pastor Jones' statement has prompted discussion of what the Bible really means to us, and has pushed front and center a deep secular question as well: are we still a nation of leaders and defenders, or are we a nation of capitulators and bullies?

For it is the bullies & capitulators who leaped to condemn Pastor Jones without first declaring that the actual murderers owned full responsibility for their actions.
Whatever one thinks about his actions or his motives - whether self-aggrandizing, misguided or prophetic - there is no denying that it takes great courage to stand against the mob that is the worldwide media industry today.

So explain why there are so many different translations of the Bible, whereas in Islam the Qur'an is considered untranslatable.

Or did He "inspire" them to write so many different Bibles?

BTW, your "Orthodox Christian teaching" isn't orthodox, it is a relatively modern view. It really bothers me when fellow Christians misrepresent history.

That "orthodox" view isn't even supported by scripture.

As a Christian myself, I don't have to worry that God was so stupid as to proclaim that the mustard seed isn't the smallest seed and I don't have to go to bizarre lengths to prove that Jesus or his recorders weren't wrong.

Get over it, guys, Muslims view their holy book differently.

... Talk about unable to comprehend what's plainly written in english.