"...to describe it in those terms I think does a great disservice to people who put their lives on the line, who risked all, for my people."
-Attorney General Eric Holder 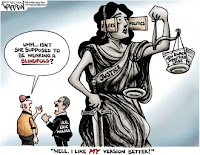 President Obama's justice department has from almost the first day spent its time criticizing the Bush administration and the behavior of its predecessors. Attorney General Holder declared that the civil rights division of the Justice Department was “once again open for business.” Holder also stated that his tenure would "restore the credibility of this department" in the same January 2009 speech.

Yet two years later, and the picture is a bit different. Aside from a cursory, soon-closed investigation into Bush's alleged wrongdoing with suspected and known terrorists in Guantanamo Bay, the DOJ has been largely idle. Hans Von Spakovsky explains at the Washington Examiner:

In the 26 months since Holder took over, it has filed only one lawsuit under Section 2 of the VRA, and that was a case developed during the Bush administration, filed by J. Christian Adams.

The section has also filed only four cases under the VRA's language minority provisions, all of which were also started during the Bush years. And the National Voter Registration Act? No action at all, other than to drop a lawsuit started under Bush.

To put this in context, the Bush administration - which Holder and his Civil Rights Division chief, Tom Perez, miss no opportunity to criticize - averaged two Section 2 cases every year, brought more cases under the language minority provisions than in all other years combined since 1965, and filed 10 cases under the National Voter Registration Act. All of this is easily verifiable at the division's own website.

Meanwhile the attorneys and workers at the DOJ aren't finding much work to do. They were ordered off the blatant Black Panther voter intimidation case, they have declared they will not enforce federal law to ensure the integrity of state voter rolls, will not enforce the Defense of Marriage Act, failed to investigate or prosecute MOVE act violations in states who drug their feet and failed to by law supply absentee ballots on time to overseas troops, halted prosecution of the S.S. Cole bomber, and ignored evidence of bribes offered to candidates to step aside for ones preferred by the Democratic Party.

It isn't that they are doing no work. Obama's justice department has sued Arizona several times for trying to enforce federal immigration law (despite admitting he hadn't read the law), Sued controversial Arizona sheriff Arpiao for civil rights violations, they're investigating Louisiana to see if the state pushed voting registration to people getting new licenses and welfare, threatened a lawsuit against prisons which quarantine infectious AIDS patients, and shifted uncollected money in lawsuits to activist groups.

It isn't like this was unexpected. Eric Holder's record before being appointed Attorney General was well known. Judicial Watch lists Holder as their number 5 most corrupt politician:

Judicial Watch strongly opposed Holder because of his terrible ethics record, which includes: obstructing an FBI investigation of the theft of nuclear secrets from Los Alamos Nuclear Laboratory; rejecting multiple requests for an independent counsel to investigate alleged fundraising abuses by then-Vice President Al Gore in the Clinton White House; undermining the criminal investigation of President Clinton by Kenneth Starr in the midst of the Lewinsky investigation; and planning the violent raid to seize then-six-year-old Elian Gonzalez at gunpoint in order to return him to Castro’s Cuba.

Moreover, there is his soft record on terrorism. Holder bypassed Justice Department procedures to push through Bill Clinton’s scandalous presidential pardons and commutations, including [pardons] for 16 members of FALN, a violent Puerto Rican terrorist group that orchestrated approximately 120 bombings in the United States, killing at least six people and permanently maiming dozens of others, including law enforcement officers.

From conflict of interest to hints of corruption to abuse of power, this guy makes me almost nostalgic for the relatively clean and professional days of Janet Reno. The Legacy Media dutifully reports briefly on each of these issues in short, often buried articles, then never looks back and never ties them together. When Attorney General John Ashcroft mentioned that he wished the nude breasts on the statues in the Justice Department building were covered, that was discussed for weeks by pundits and news programs, but these events barely get noticed.

*This originally ran on the Washington Examiner Opinion Zone.
Posted by Christopher R Taylor at 8:01 AM