THE TROUBLE WITH BULLYING

"If you mention extortion again, I'll have your legs broken."
-Animal House 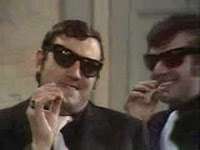 Recently, President Obama held a summit on bullying, just in time to not deal with the various actual crises around the world. That summit resulted in a website about bullying which includes these warning signs of a bully:
Strangely enough, even as this material was being made available, President Obama's friends in the Wisconsin unions were busy at work doing exactly these things. From intimidating recall petitioners after their Democrat buddies who fled the state, to ripping up petition forms, to threatening businesses with boycotts, the unions are busy trying to force people to do what they want. After all, they need that lunch money.

Most recently, Radio Vice Online posted a letter that's being sent around to big donors to the Walker campaign, trying to force them to reverse their support. In the text of the larger letter is this bit:

The undersigned groups would like your company to publicly oppose Governor Walker’s efforts to virtually eliminate collective bargaining for public employees in Wisconsin. While we appreciate that you may need some time to consider this request, we ask for your response by March 17. In the event that you do not respond to this request by that date, we will assume that you stand with Governor Walker and against the teachers, nurses, police officers, fire fighters, and other dedicated public employees who serve our communities.

What happens if they do that? Public boycotts of businesses who will not publicly oppose Walker and his efforts to cut spending and waste in Wisconsin. Notice here the presumption by the unions: do what we demand or you are against these people. Not the unions, not the spending, but the actual people. You hate cops and nurses if you do not publicly stand up in opposition to Governor Walker.
Now I understand that unions fear losing their power (and hence the Democratic Party much of its power), and I understand that these guys by design use threats, intimidation, and strongarm tactics to achieve their goals - that's always been part of the union structure. I understand that they believe by overstating their case they can intimidate businesses into obeying their commands.

It just seems to me that this is a bit counterproductive. The public will soon realize that the cuts passed by the Wisconsin Assembly were not particularly big or shocking. They will soon see that the teachers' unions did not take a huge hit and that teachers are not particularly harmed by this law. What they'll remember is the immensely disproportionate response by the unions, the Democrats, and leftists of all sorts to a governor doing what he was elected to do: cut the budget and save the state from bankruptcy and fiscal collapse. It was like a 3 year old throwing a screaming tantrum on the floor when he's told they will be eating a Burger King, not McDonald's.

The more people are pushed like this, the more they will tend to get annoyed and contrary, especially with thuggish, blunt tactics of this sort. And the problem for Police and Fire Department unions is that most of their members are union because they were forced to be in order to be on the job, not because they particularly love unions. Most cops and firemen tend to be more conservative, and I think if most of the members were asked, they'd actually support Walker, or not be terribly opposed to him at the very least.

In the end, all this kind of thing does is prove that public employee unions ought never have been allowed to begin with, because they are trying to affect public policy and law rather than worker's rights and benefits. Its one thing to fight for your membership's fair share of profits and reasonable treatment. Its another to fight for political power and laws that affect the entire state.

Meanwhile, the National Labor Relations board ruled that threats of physical violence by union leadership and members isn't coercive. I get it, their backs are against the wall and they're lashing out, but the more people learn about this, the worse their position gets.

*Hat tip Ace of Spades HQ for this story.
Posted by Christopher R Taylor at 8:15 AM