"We praise and thank Allah All thanks belongs to Allah, for enabling the mujahideen to carry out this operation."
-Abu-al-’Azz 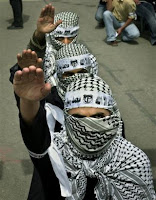 While the world was focused on Japan and its terrible disaster, another awful event took place in Israel. A family of five, including a one month-old baby, was killed by a palestinian terrorist, stabbed to death and hacked apart for daring to live in a home that the palestinians do not care for.

When other palestinians heard the news of this ghastly event, they quickly rose up to send aid and sympathy to the Israelis, promising to spare no resources to track down this monster and punish him for his heinous crime.

Well, no not really. They handed out candy and celebrated.

Hamas, which on paper at least is in charge of the palestinians, issued a statement condemning the attacks:

Palestinian National Movement Hamas official Ezzat Al-Rashak said that the movement is not responsible for the murder of the five family members from the Itamar settlement.

Al-Rashak confirmed that harming children is not part of Hamas' policy, nor is it the policy of the resistance factions.

He also confirmed that the possibility that the incident was carried out by settlers for criminal motives should not be ruled out.

If I had to guess, I'd say Hamas probably didn't order or have anything directly to do with this attack. Naturally they had to suggest this was criminal, not terrorist and maybe even was another Jew? But then, that was only the English language statement, issued to sooth western leftist and legacy media consciences. In Arabic, the tone was a bit different (courtesy Al Mutarjim at Big Peace):

Five Zionist usurpers were killed the morning of Saturday, 12 March 2011, in a knife-stabbing carried out by a Palestinian in the usurper (settlement) of Itamar east of the city of Nablus.

Our correspondent in Nablus reported that a Palestinian mujahid was able to break into the usurper (settlement) of “Itamar” south of Nablus in the occupied (West) Bank, and stabbed five Zionist usurpers.

Zionist media sources said that “A Palestinian broke into the usurper (settlement) between the hours of 9:30 – 11:00 PM, and killed five usurpers from one family while they were sleeping.” They confirmed that the perpetrator of the act was able to escape.

Powerful forces from the Zionist military and police arrived at the location, including the chief of staff of the Army, Benny Gantz, and the head of (Israeli) Central Command, Avi Mizrahi.

The Chairman of the Usurper (Settlement) Council, Danny Dayan, also arrived at the usurper (settlement) of “Itamar,” and said: ”This is one of the most serious attacks which has been committed in the last few years.”

The Closure of Nablus and the Imposition of Road-Blocks

Eye-witnesses informed our correspondents that Zionist airplanes, powerful forces from the military and police, and ambulances rushed to the scene and transported the wounded and slain, while occupation forces spread throughout the vicinity of the village of Awarta, and fired dozens of flares.

The witnesses added that powerful occupation forces cordoned off cities and villages, including Nablus, and began to sweep the area, searching for the perpetrators.

It is noteworthy that a similar operation occurred in June of 2002 led to deaths of five usurpers after being shot in the same usurper (settlement) of “Itamar.”

Also, the al-Qassam Brigades were able to execute a series of operations in August of last year, which were named “Stream of Fire,” by which the mujahideen of al-Qassam were able to kill four Zionists. Intelligence officials from both the military and Abbas’s militias in the West Bank were confounded by these operations, and worked with all diligence to try to discover the perpetrators.

Those usurpers, they had it coming, really. Notice the tacit support of these actions, the lack of condemnation, the tone of contempt and attack toward the family for its radical living in a house, and the continuous use of the word "usurper" to indicate that anyone living in that area is not proper or legal unless they are palestinians. Also note how Israelis are just called "Zionist" which detonates the whole "I'm not anti-Israel, I'm just anti-Zionist" lie. The palestinians see no distinction: Jews in Israel are Zionists.

This kind of double statement is common in the area, Nobel Peace Prize winner and AIDS victim Yassr Arafat used to do this regularly: one statement for the west, one statement for the Palestinians. They usually were contradictory, with the western one tailored to appeal to the leftist journalist mindset and the other to praise suicide bombers and murderers. With someone as corrupt and self-focused as Arafat its anybody's guess what he really thought on the issue, but Hamas has made their position abundantly clear.

Why do this? Because it gives the legacy media and the academic left in the west a plausible excuse, a statement by the palestinians which seems to say what ought to be said. They can point to it and say "see, they don't support this" and try to keep the moral high ground in supporting terrorist groups. It gives the left ammunition to try to paint Israel as the bad guy when they respond.

The problem is, the information gets out anyway, and with the internet more and more people are making the other side known. Objectively, if you will not call evil, evil? You're supporting it.
Posted by Christopher R Taylor at 9:44 AM

Read about this a few days ago, including the consequent Palestinian partiers.

NPR carried the story this morning, with hand-wringing about whether Israel's conservative wing was milking the tragedy for its own ends and praise for the official Hamas statement. Lost in this nuance: any mention at all of the celebrations in Gaza. Shameless.