SCISSORS WITH LASERS ON THEM

Another nifty gadget I've seen recently other than the zip-up headphones from last week is this pair of scissors. But before I get to that, why are they called a pair of scissors? Is there one Scissor somewhere, unpaired? Wouldn't that just be a strange looking knife with one edge? Maybe its a corruption of the word "incisor." Or perhaps the name comes from some long-lost verb "to scis" as in "I sure scised that paper good."

Anyway, something that's difficult to do, for me at least, is cut on a straight line with scissors. Wrapping gifts is always interesting if I try to use scissors, and I usually end up with an X-acto knife and a straight edge so I get a fairly even cut. 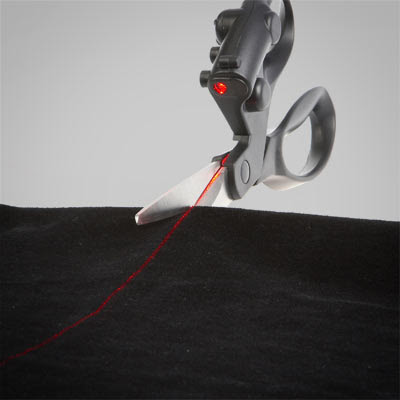 This pair of scissors is equipped with a laser that paints a red line on your target, which gives you a straight path to follow rather than guessing or drawing on the material you're cutting. At 16 bucks they aren't terribly expensive, and I can think of a lot of people who'd appreciate the gadget.

Sure, its no flying car, but its still a nice idea.

*UPDATE: Commenter KurtP brings up a good point: just because you have a laser line doesn't mean you'll cut straight. However, I think it can, if you use the system properly.

When I first was trying to learn how to drive I looked at the road right in front of the car, as you do when you walk. As a result I couldn't keep the car going straight, because I had to continually adjust for small movements, and got out of control. The instructor pointed out that I have to look further down the road and it worked out fine.

You'd have to do the same thing with the scissors, look down the road and focus on the line rather than what you're cutting.
Posted by Christopher R Taylor at 7:44 AM

The still won't help cut a straight line. All that does is show where the scissors are,,, 'aimed.'