"My God, It's So Thick!"
-EPA head Lisa Jackson upon seeing crude oil washed up on Gulf shores 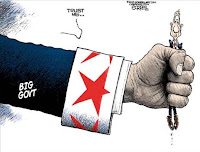 The Environmental Protection Agency was created in 1970 by Richard Nixon, and tasked with protecting human health and the environment. As the decades have drawn on, the EPA has been given greater and greater power by congress, with the most recent the Clean Air Act in 1990 signed by President Bush the elder. That act gave the EPA broad-reaching powers to protect the environment by defining pollutants and the freedom to act to limit and reduce them. But has the agency overstepped its bounds?

Under President Bush, the expansionist tendencies of this agency were restrained, such as their desire to declare CO2, a common gas exhaled by all humans and required by plants for survival, a pollutant. The theory behind this is that it would allow the EPA to act to limit "carbon emissions" which are blamed for global climate change according to some scientists.

When President Obama took office in 2009, he not only removed those restraints, but encouraged the agency to take bolder action to protect the environment and combat alleged human-caused climate change. And the EPA has been very aggressive in its efforts to do just that. They rapidly declared CO2 pollution and began working on ways to reduce its output, something congress even when controlled by Democrats refused to do. In fact, the EPA has been working hard the 13 months, with idea after ruling after regulation that impacts you directly.

For example, the agency seems determined to drive food prices up through a series of actions:
That's only the regulations that would directly affect food prices alone, which are already rising in America. When food prices go up, the people most negatively impacted are the elderly and the poor who have fewer resources to deal with the increase in costs. Already a record number of Americans are on food stamps.

But its not just in food production that the EPA has been busy. Among their latest work are these gems:
Why all these changes? For the environment, of course, because the EPA believes this will be for the good of everyone. The problem is their choices are actually quite damaging to the economy, harmful to business, destructive to jobs, and will tend to increase inflation.

The Environmental Protection Agency is continually looking for more new ways to use the power it has through legislation to implement more and more rules and regulations that burden business, farms, and American consumers, at a time when people are suffering from a weak economy already. Many of their ideas seem to betray a basic ignorance of how farming and rural life is actually led.

Academic, theoretical ideas are fine if they are tested with real world practical experience and examination, but too many in the Obama administration do not care for that critical step. They have their idea on how things should and do work, and reality just gets in the way.

*This originally ran on the Washington Examiner Opinion Zone.
Posted by Christopher R Taylor at 7:25 AM