They only hit until you cry
And after that you don't ask why
-Suzanne Vega, "My Name Is Luca" 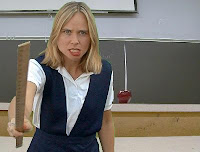 In recent decades, there have been many news stories about abuse of teen-aged and younger boys by Roman Catholic priests. As bad as these stories were, the real scandal came when it was revealed how the Roman Catholic leadership, fearing scandal and damage to the church, in far too many cases merely shuffled these priests around, paid off families of victims, and covered up the crimes. Some priests were moved to several different areas, each time becoming tied up in scandals of molestation and abuse of young people under their care.

Using this as an excuse to express a preexisting hostility toward religion in general and Christianity in specific, the child molesting Roman Catholic Priest has become a running joke in popular culture far outstripping the actual numbers and breadth of the scandal. What hasn't been given as much attention, however, is the abuse of children by teachers.

Sure, we'll read about the pretty teacher getting frisky with a teen-aged boy, but that's just the tip of the iceberg, although it happens far too often. Douglas Montero at the New York Post alleges that one child is sexually abused a day in the New York City school system alone. A third of the accused abusers are repeat offenders, already cited for inappropriate behavior.

The Post has analyzed 117 cases of sexual abuse substantiated by Stancik's office over a 2 ½ year period - from January 1999 to June 2001 - to determine how offenders are picking off city kids.

Among the observations, The Post investigation has found that more than 60 percent of employees accused of sexual abuse - mostly tenured teachers - were transferred to desk jobs at district offices located inside schools. Forty percent of those transferred suspects were repeat offenders.

Problem teachers, who sometimes get away with a sexual offense, are surreptitiously transferred to other schools - a practice known as "passing the garbage."

The teacher's unions leap to the defense of these abusers, fighting to keep their jobs and protect them from legal sanction. As a result, for decades, New York City had "rubber rooms" where teachers who had been suspended or removed from their job were still on the city payroll, paid to come to a room and sit all day. Recently these rooms were discontinued, but the practice of maintaining teachers on the payroll who were removed from their jobs has not.

Part of the problem is that these unions by contract and law are required to defend their membership, regardless of who they are. So they put lawyers on the case, push to protect their union members, and defend them even if they are abusers.

However, it is also true that too many union leaders and members view their position as being "us against them," where those causing trouble for any member of the union are viewed as the enemy and suspect, regardless of the circumstances and crimes involved. Teachers tend to have this viewpoint as well, feeling persecuted and attacked on all sides.

Schools have the same motivation that the Roman Catholic Church has to protect themselves from scandal and negative opinion in the public. No school wants to become known as the one where that teacher was molesting the cheerleaders or beating the autistic kid, so they try to find ways to cover it up and keep it quiet, which an arrest, trial, or a firing and possible lawsuit would definitely not do.

The only people not represented or protect here again are the victims, who are isolated, ashamed, unwilling to report these actions, and powerless against organizations with money and political clout. The system at present is practically designed to shield abusers and maintain their positions, just as the Roman Catholic Church once was set up. Unlike that organization, however, teachers, schools, and unions have not become targets for comedians, movies, and politicians to attack. And certainly the legacy media won't cover union teachers the way they do Catholic Priests.
Posted by Christopher R Taylor at 10:48 AM