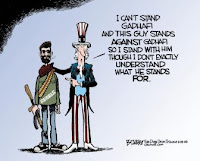 Other than a post on the inconsistency of treatment and action between President Bush and President Obama (which Instapundit kindly linked), I haven't posted on Libya much. Part of the reason is that I've been largely confused about what's going on over there, and part of it is that I wanted to wait and see.

Immediately upon reading that the UN had approved a coalition attack on Libyan forces, I commented that I was behind our troops and wished them a successful, swift, and safe effort that brought them home soon. The problem is that nobody - not even the President of the United States - seems to really know what the troops are doing or what they are trying to achieve.

We were told this is a no-fly zone, but the coalition immediately began missile attacks on tanks. To the best of my knowledge, no one has yet created a flying tank. What are our goals? What is the plan, what is this coalition attempting to accomplish? Many have suggested that the reason President Obama did not go to congress for approval of this action is that he didn't have any answers to those questions, and that sounds all too probable.

Moammar Khadaffi should have been dealt with long ago. He is a terrorist-supporting, terrorist-training, terrorist-mongering scum who built up WMD, abuses his people, and generally is a horrible person. Removing thugs and tyrants is always a goal I support and appreciate. Aside from the unfinished business of a repeatedly-violated cease fire, Libya is almost as good a candidate for attack as Iraq was. The people of Libya who were trying to get rid of Khadaffi were being bombed and shelled by his military.

"The president does not have power under the Constitution to unilaterally authorize a military attack in a situation that does not involve stopping an actual or imminent threat to the nation."
-Candidate Obama

The problem is that this is happening around the world, and has for decades, centuries even. There are horrible dictators everywhere deserving of removal from power, there are people in dire need of help, and there are nations with weapons of mass destruction that cannot be trusted with them. North Korea springs to mind as at least as ghastly as Libya's government. Sudan needed the world's help desperately. Burma has been a hell hole for decades.
Why did we suddenly go into Libya now, and not these others? Why help the people of Libya now? The only plausible answer I can come up with is the same reason Britain let a notorious, unrepentant, radical terrorist and murderer go free to that nation on a fake cancer claim: oil.

Now, unlike the typical doofus leftie protester, I'm aware that oil is the blood of civilization right now, we need oil. I understand that nations go to war for their self interests, and that the idea of Khadaffi burning and destroying oil assets to keep them out of the hands of rebels is a reasonable concern.

Yet that's not what anyone says when they talk about this effort. They always claim this is about humantarian reasons, coming to the aid of civilians in danger. William Jacobson at Legal Insurrection runs down the UN resolution and the laws being invoked, but he asks an uncomfortable question:

The truth is, you can't protect civilians from the air, or from sea, you have to have boots on the ground.

My basic doctrine for US involvement in military action is that it has to be a direct and clear US interest; the oil will flow no matter who ends up in charge, that's why the world put up with Khadaffi for decades. If the United States is going to spend billions it does not have and the blood and futures of our young men, there has to be a good reason that impacts the US. That's why I opposed going into the Sudan, as horrible as it was.

Victor David Hanson brings up some good objections, including this one:

What body/country/alliance determines targets, issues communiques, or coordinates diplomacy? The U.K. goes after Qaddafi, and we plead “They did it, not us”? Again, fairly or not, the impression is that Obama dressed up preponderant American intervention under a multicultural fig leaf, earning the downsides of both.

Like me, he can't figure out what exactly is the plan or what is being worked toward here beyond "save the civilians." Timothy Carney has also noted that the story keeps changing depending on what's going on and what day it is:

On Tuesday, for instance, Obama was asked by Spanish-language Univision about an "exit strategy" from Libya. "The exit strategy," Obama said, "will be executed this week -- in the sense that we will be pulling back from our much more active efforts to shape the environment. We will still be in a support role. We will be supplying jamming, intelligence and other assets unique to us."

As I pointed out in A Study in Contrasts, President Obama and his team are making a complete about face with this action compared to their previous rhetoric, which makes it even more difficult to know what they even have in mind, or why.

And who are the rebels? What is their goal, what do they believe in, what do they want to achieve beyond "get rid of Khadaffi?" Are they for democracy, are they militant Muslims, who is their leadership, where are they planning to take the country? Is helping them really in the best interests of the US?

I guess my biggest concern is that this was pretty hasty, seems without any clear plan or purpose, at a time when we cannot afford more military adventures - we could barely afford it under President Bush - and this time the president didn't even consult anyone except the UN. And shouldn't the president be home at least when he sends the country to war? Shouldn't he present his case to the American public, come home in a time of crisis and war?

And since when did the UN substitute for the American people and US Congress for determining action by our military? I am behind our troops, and not entirely hostile to the principle of removing Khadaffi from power, this just seems really poorly implemented.
Posted by Christopher R Taylor at 9:05 AM

If one was looking to irreparably damage NATO, disgrace two nations the administration is at odds with (including one former ally,) and lower the US's standing in the world, I couldn't think of a more clever and underhanded way to go about it.