THE LEFT AND THE OWLS

"There's no winner in that debate" 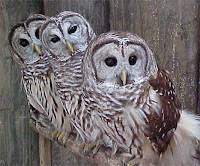 Oregon is my home, and I have lived in this beautiful state for more than four decades. In the Carter recession, I remember waiting in a line that stretched all the way around a newly built Lyon's restaurant and down the block a ways. I didn't have any experience, just a need for work, and they only had a few dozen positions open. I didn't get the job. Just last week they tore down that building and it brought back the nervous tension and disappointment of those days.

I also remember another economic rough time that Oregon went through later that decade. It all started in 1986 when an environmentalist group got the Northern Spotted Owl listed on the endangered species list. They then went to work trying to shut down logging in Oregon because they claimed this would destroy the only possible habitat of this owl, thus hastening its demise. The logging industry fought hard but in the end, President Clinton's Northwest Forest Plan shut down most logging in the state, ending tens of thousands of jobs and shutting down entire towns.

Missing in the press reporting and the government analysis of this controversy was the fact that the owls were actually able to live and did nest in places other than the old growth forests and where loggers were working. Famously one was photographed living in a K-Mart sign in Roseburg, Oregon. The entire argument of logging killing off the owl was a lie, and for many involved, a deliberate lie, as they knew that the bird could and did have a broader habitat.

After the logging industry was all but wiped out in Oregon resulting in years of economic hardship and tens of thousands of suddenly unemployed, often older workers, it was discovered that the population of the owls continued to decline. The cause? Natural selection is what evolutionists would call it. It turns out the Spotted Owl wasn't able to compete for its living space, and another species was pressuring it out.

With this information the Bush administration began allowing more logging in Oregon, but the Obama administration recently reversed this policy. The Obama solution? Kill Barred Owls. Eric Mortenson reports in The Oregonian:

Come summer, federal wildlife officials expect to finish a draft environmental impact statement that most likely recommends taking to the woods with shotguns. Over the next year, in three or more study areas from Washington to northern California, they might kill 1,200 to 1,500 barred owls -- the larger, more aggressive competitor that has routed spotted owls from much of their territory and become, along with habitat loss, the biggest threat to their survival.

Californian efforts along these lines have shown great success in returning Spotted Owls to their old habitats.

Yet, aren't we told in science class that weaker species incapable of surviving in an environment are weeded out and supplanted by stronger species, thus showing the natural progression of evolution? Is this not a natural part of the world which has, we've been told, been going on for hundreds of millions of years? Is this not how tiny cellular creatures eventually ended up as gigantic dinosaurs, according to teachers and scientists?

At what point do we decide that suddenly this is bad and must be stopped, and why? If this is how the world works, why should humans interfere? The left are the very ones who keep telling us that we ought to leave nature alone, that we need to stop interfering and destroying the natural world, yet they are the very same ones who call for us to save whales that are stuck on the ice or sand and now for us to kill the owls who roost in the wrong tree. And they wonder why we on the right have a hard time taking them seriously.

*This was originally posted on the Washington Examiner Opinion Zone.
Posted by Christopher R Taylor at 8:44 AM