IT'S YOU vs THE ONES IN POWER

"I hope to be pardoned, Sir, for my zeal upon this occasion." 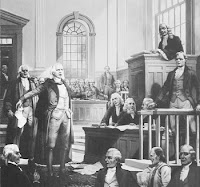 You've probably never heard of Andrew Hamilton. He was a lawyer in the 18th century who helped settle one of the most foundational concepts of rights and liberty in the United States in a court case.

In 1735, newspaper publisher John Peter Zenger's New York Weekly Journal so enraged the Governor of the New York colony that he took the man to court for libel. Under English Common Law, the jury was restrained to finding if the accused had actually printed the libel or not. At the time, something being true was no defense for libel, only that it was defamatory. Juries were not to decide whether something was libelous or not, only whether the printing had actually taken place.

Zenger's lawyer Andrew Hamilton, however, took a different tack. He called for the jury to nullify the law with their decision and appealed to them to recognize that the ability to speak or write against the tyranny or oppression of an administration is critical for a free people. Hamilton's argument helped establish the freedom of the press and his argument is a powerful statement of liberty and the importance of being able to speak your mind.

Andrew Hamilton argued that the ability to speak as you see fit, so far as you do not deliberately and maliciously lie to cause damage, must be protected in order to have any liberty at all. He argued that this was a natural right of all men:

They have a right publicly to remonstrate against the abuses of power in the strongest terms, to put their neighbors upon their guard against the craft or open violence of men in authority, and to assert with courage the sense they have of the blessings of liberty, the value they put upon it, and their resolution at all hazards to preserve it as one of the greatest blessings heaven can bestow....

Then Hamliton went on to warn about power, about government, and about tyranny, and the need to continuously guard against encroachment on liberty and the cost of failure:

Power may justly be compared to a great river. While kept within its due bounds it is both beautiful and useful. But when it overflows its banks, it is then too impetuous to be stemmed; it bears down all before it, and brings destruction and desolation wherever it comes. If, then, this is the nature of power, let us at least do our duty, and like wise men who value freedom use our utmost care to support liberty, the only bulwark against lawless power, which in all ages has sacrificed to its wild lust and boundless ambition the blood of the best men that ever lived....

Andrew Hamilton called on the jury to make a decision separate from the law, which all but required a guilty verdict. They agreed, and found Zengler not guilty, establishing the freedom of the press to print things that the government does not care to read about its self. That liberty extends to all peoples in all formats, be it internet or conversation, a book or a letter, and it is precious to the American people.

Its good every so often to remind ourselves why this is so precious: because without the ability to criticize and disagree, even to call for opposition to those in power and their policies, we will always lose our liberty step by step until we have little or none as a nation.

*This originally ran on the Washington Examiner Opinion Zone; it was lifted in part from my Constitution series.
Posted by Christopher R Taylor at 10:23 AM