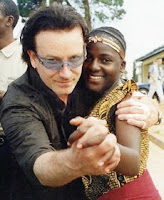 Bono, the lead singer from the pop group U2, has spent the last twenty years or so running about trying to be more relevant and deep. He's latched on to Africa as a cause, and has been talking to various world leaders and organizations, trying to get more aid to Africa and more money spent there. Bono is primarily concerned with the AIDS epidemic there, but the continent in general has his sympathy, or pity.

Bono's primary thesis seems to be this: Africa is a place with lots of resources, yet its a miserable backward area, generally poor, wracked with war and disease, and in bad shape overall. Thus, the answer must be that it hasn't gotten sufficient western money and aid. How he manages to fit that with the history of successful, advanced cultures around the world who made it without western aid I'm not sure. I've written in the past about Africa and why I believe it is having so much trouble getting past its tribalism, wars, and poverty, so I won't go into that here.

What I do want to write about, however, is Bono's approach to Africa. Bono wants businesses to invest in Africa, governments to send aid to the continent, and doctors and educators to fight the AIDS epidemic. However, when it comes to his personal behavior there, things are a bit different. Magatte Wade recently wrote at the Huffington Post about this topic:

The Wall Street Journal recently reported that Edun, the company started by Bono and his wife, Ali Hewson, is now producing most of its products in China. Edun's mission is to "encourage trade with Africa" and "celebrate the possibilities and the people of the continent." Edun "celebrates" Africans by moving the supply chain to China?

Edun's high profile failure to produce goods in Africa is devastating to the brand of Africa. Our continent already has the worst brand of any region on earth. In a world in which almost no one believes that Africans are capable enough to create successful companies, Edun's failure will quietly confirm those bigotries.

Bono's company moved out of Africa, instead of working in the country with the abundant resources there and stimulating the local economy. They failed, and Bono moved most of their production. To China. Wade goes on:

African audiences understand immediately the point I am making. As damaging as African poverty is, it will not be alleviated by well-intentioned rock stars creating African pity brands - and then producing the goods in China because they can't get Africans to produce adequate quality goods. Bono and Hewson are half right - entrepreneurial activity is the only long-term solution to Africa's problems. What they don't realize is that actions speak louder than words. And there is no way that they can "encourage trade with Africa" and "celebrate the possibilities and the people of the continent" by means of producing the more elegant goods in China and the ugly, amateurish t-shirts in Africa.

Magate Wade is a Senegalese entrepreneur, and she notes that Bono's move just made her work and her life a lot harder. The problem here is that Bono has nice ideas, but when it comes to hard work and solutions, he finds the easy way out. I think he really does care and wants to help, but he's not real clear on what would really help, and his concerns are eclipsed by the most important thing in his life: Bono.

The other problem is that the African people have to meet these companies half way, and they aren't. They have to prove they want to work hard, succeed, and produce quality, and too often that's not the case. African nations could eclipse China in economic growth, product, and business if they'd try, but their culture has too many trapped and things just don't get better.

So ultimately, I have to blame both sides for this failure, but Bono as such a high-profile figure both as a celebrity and as an activist for Africa, does far more damage. As Wade puts it, "if Bono couldn't do it with $20 million and the best contacts in the world, clearly it is not possible to manufacture in Africa. If Bono can't make it happen, who can"
Posted by Christopher R Taylor at 7:54 AM

"if Bono couldn't do it with $20 million and the best contacts in the world, clearly it is not possible to manufacture in Africa. If Bono can't make it happen, who can?"

Perhaps someone with business skills and ages of patience?

Also at least they are trying ....