"Once you work with a studio on a film, the studio is sort of like this enormous clam that just opens, takes everything and then closes, and no one enters again. They own it all."
Don Bluth 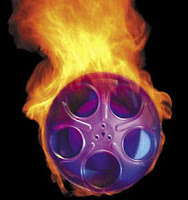 In the early part of the 20th century, movie studios owned and operated movie theaters. There, they'd show their own product and rarely anyone else's and pull in all the profit. In 1948, the Supreme Court ruled that studio ownership of theaters was a violation of anti trust laws in US vs Paramount Studios, and movie theaters became privately owned.

There's a sort of modern version of this going on, but in reverse. At present, businesses such as Red Box and Netflix are able to obtain new releases 28 days after they are screened in theaters and their business is booming. Netflix in particular has grown from a clever idea to a gigantic business in just over a decade, and is shifting away from its subscription video mail service to direct streaming to homes over the internet. This last quarter, Netflix earned almost $50 million in profit.

Hollywood doesn't care for that system. They get money from Netflix, but not as much as they'd like, so studios are working on a new system that gives them a bigger piece of the pie. According to Marc Graser at Variety, Time Warner is working on a new business called Conglom to focus on Video On Demand (VOD):

Conglom will significantly shorten the window between a film's theatrical release and its VOD bow from 90 days to 60 and will charge about $30 for the pic on the earlier date, mostly via cable operators.
...
Time Warner is said to be eyeing a pricetag of $25-$30, though analysts believe such premium services could potentially charge as much as $60, depending on the property.
...
As a result, the exec wants to protect a lucrative area of Warner Bros.' bottom line by imposing a longer delay than the 28 days to which Netflix and Redbox have currently agreed before offering up new releases once a DVD or Blu-ray becomes available in stores. That could increase to as much as 45 days, industryites say.

The plan was for this to start by March, but it has been delayed somewhat.

Most movies are released on DVD about four months after theatrical release, with some a bit sooner (Paramount and Disney have been releasing new content 88 days later). Video ON Demand typically gets movies 45 days after DVD release, and movie channels like HBO tend to get the movies 18 months later. Since theaters make most of their theater money the first week of a movie's theater release and almost none after four weeks, the sooner they can get it out to buyers on DVD the happier they are. DVD sales on many movies eclipse their box office draw.

The problem is, I just can't see too many people paying 25-60 bucks to watch a movie on their television set when they can wait a little while and get it on Netflix for a fraction of that. Its true that the movie experience is often better in a home theater setup, but not that much better. This seems to be a bit overpriced.

Still, the more options available the consumer, the better, and I can't begrudge studios wanting to make more money, especially as pirating is taking a serious bite out of their profits.
Posted by Christopher R Taylor at 9:01 AM

Perhaps, but given the the crap issued by the studios, I can't see many people paying a premium to see the releases.