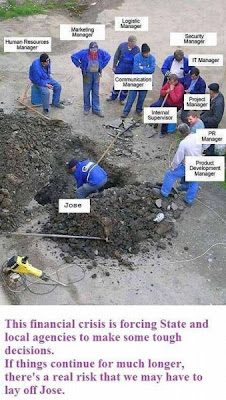 If they want to show voters that they are serious about cutting spending, they'd start at home. do they really need that big a salary? Do they really need all that staff? How about those freebies, all the benefits like workout rooms in the capitol building, the limos, the plane trips, the junkets? If they made conspicuous and specific, direct cuts to themselves, people might sit up and take notice.

It isn't that President Obama does not have too many czars doing the work of the cabinet, it isn't that the IPCC is a waste of US money and unconstitutional funding, and it isn't that the health insurance bill doesn't need cutting. The problem is all of this is showboating and sticking a thumb in the eye of their enemies rather than addressing the real issues they were elected to deal with.

People want jobs, they want spending cut, and they want to have at least the slim hope that crushing debt the Democrats mountained on the future will be trimmed back. That's where these guys need to immediately and aggressively be working, not all this other junk.

And to extend this further, states which are facing financial crisis need to do the same thing. What can they specifically cut in their own offices and staff? Where in their budgets can cuts be made and sacrifices be undertaken? What could Governor Walker be doing in addition to dealing with the immense cost of public employee unions?

And when we mention unions, its time for them to do the same thing. What could their leadership be doing to cut their costs, trim their spending, reduce their budgets? By doing so they could reduce individual dues and even contribute to help offset the increased cost that states are now requiring them to pay for.

Because that's what responsibility is about, not demanding other people - be they unions, political enemies, or wealthy voters - get you out of the mess you got yourself in to. Start with yourself and what you can do, then maybe its time to start demanding others make sacrifices.
Posted by Christopher R Taylor at 8:20 AM