"Great news!!!: Homeless people save big on utility bills."
Hey, have you heard the news? Taxes are lower now than they've ever been! Check out this chart! 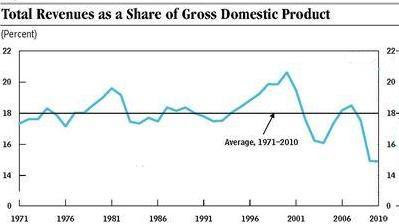 Wow, that's amazing! The Associated Press leads with this headline:

High Taxes? Actually, they're at a 60-Year low!
Wow, that's lower than under President Reagan! The article goes on:

Actually, as a share of the nation's economy, Uncle Sam's take this year will be the lowest since 1950, when the Korean War was just getting under way.

And for the third straight year, American families and businesses will pay less in federal taxes than they did under former President George W. Bush.

Gosh, that's terrific, I guess we don't need a tax cut anywhere, we should even raise taxes, huh?

Except... the headline is incredibly misleading, even a lie. What they are examining here is not taxation, but tax revenues. Because the economy is in the tank, the current tax levels are generating less revenue than at any time in the last 60 years. Eventually, the article gets around to mentioning that:

Income tax payments this year will be nearly 13 percent lower than they were in 2008, the last full year of the Bush presidency. Corporate taxes will be lower by a third, according to projections by the nonpartisan Congressional Budget Office.

The poor economy is largely to blame, with corporate profits down and unemployment up.

They also note that the "stimulus" package included tax rebates for 2 years, which end this year. They also mention the tax laws which were put into place by the GOP Congress under President Bush which are steadily granting greater tax breaks for children - without mentioning it was under Bush.

Here's what that chart looks like with a projection of a healthy economy.

See where that blue line goes? That's what happens when the "stimulus" tax break wears off and the economy turns around, tax revenues skyrocket. Without changing one thing in the tax code.

This kind of deliberate misinformation and intentionally misleading story frustrates and angers me. Its the sort of stuff lefty commenters like to throw around, without looking more closely, and its the kind of thing news outlets do to help their political allies in office. This is deliberately designed to try to stop Tea Party momentum, and make calls for no more taxes look stupid.

Or, as a commenter at Legal Insurrection where I first saw this story puts it:

The cashier at my local grocer routinely inspects the authenticity of any twenty dollar bill; holding it up against the store's light. There's a lot of fake money in circulation, she tells me.

If you handed her AP's headline, she'll call the cops on you. Because the invisible ink on AP's headline actually says "By our own estimate, Tea Party types and their supporters do not have a legitimate cause against the Government's imperial entitlements to your money"

Its one thing to get your story wrong because you're ignorant or misled yourself, or perhaps because you're too lazy to get it right, but to deliberately get it wrong to manipulate the public? Small wonder people are starting to look for other sources for their news and information.
Posted by Christopher R Taylor at 8:07 AM