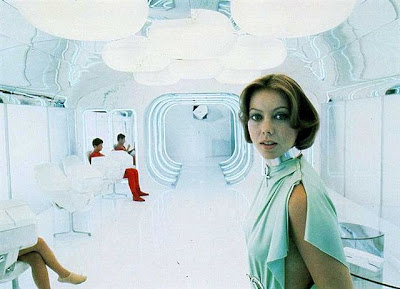 Logan's Run was one of those 70s sci fi movies that was actually very close to actual science fiction. Although it had plenty of attractions such as laser gun fights, Farrah Fawcett, and various sexy girls in transparent (or no) clothing, Logan's Run was actually a cautionary tale about a false utopia and the potential danger of overemphasizing youth culture.

The movie moves at a strange pace like many of its time, with sudden bursts of action and chases interspersed with philosophical moments and strange imagery. The final scene doesn't really make sense and it is an inconclusive finale with young people escaping their domes to meet elderly people for the first time.

I like Logan's Run despite some of its very dated images and scenes, and many of the effects hold up extremely well, particularly the models of the domed cities. Like many films made at the time, this one predicted an ecological disaster of unknown origin and type, where people live in carefully controlled isolation in fear of the outside world.

Now a remake is on the way, which leaves me uncertain. There are definitely parts of the old movie that could have been done better, but I fear what new writers will do with the basic themes and concepts of the old movie, particularly discovering the old capitol building and learning about America, liberty, and what once was so great.

Andrea Miller writes in Cineplex Movie Blog that Ryan Gosling is going to be the star of the remake. Gosling was in the recent movie Blue Valentine and The Notebook. I don't know anything about this guy, having never seen a movie he was in. Gosling is 30 years old, the cutoff date for the original Logan's Run movie before people are carried up in the Carousel and killed. Apparently in the book the age is 21.
Posted by Christopher R Taylor at 8:38 AM

I too love this film, I hope they don't mess it up too much on the remake. I should read the book, get a better sense of what the author was trying to get across.

I guess we'll see how badly Hollywood botches this one.