A REASONABLE AMOUNT OF TROUBLE 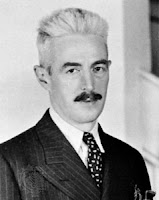 Dashiell Hammett is one of America's greatest authors, the man responsible for the "hard boiled" detective novel, and creator of characters such as Sam Spade and the Thin Man (aka Nick Charles). His works are finally becoming recognized as literature and Hammett is being spoken of with the same sort of reverence and admiration as Hemingway (who I consider a much inferior author).

Recently, a previously unknown Dashiell Hammett story was discovered. Andrew Gulli, who specializes in finding lost and unknown works by major authors, describes the story as a "thriller with psychological elements." The nineteen-page short story will appear in an upcoming issue of Strand magazine.

Typically these lost stories are ones that were pitched to an editor and rejected or a prototype of later stories, something written then cannibalized for a better, fuller publication. Sometimes they are good, often they are inferior, but its always interesting to see something new from an author you like, even if its not their best work. Most writers put out a lot more material than ever sees publication.
Posted by Christopher R Taylor at 9:03 AM