RAGING WITHOUT A CAUSE 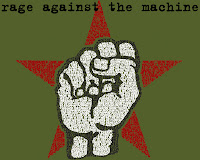 Rage Against the Machine is one of those hard rock protest bands that showed up in the late 90s and early 2000s. Most of their songs are about fighting the "man" and they seem to subscribe to just about every faux anarchist "corporations run the world" conspiracy that exists. Here are a few of their lyrics:
...and so on. Like their name suggests, they have no solutions, no ideas, and they are perpetually outraged and angry at everything, everywhere. The overwhelming theme is that we're too white and European and did everything wrong in America. They also mistrust authority, government, and those in power... in theory.

Like most leftist faux anarchists, however, they seem to be perfectly fine with government and authority of a certain kind. Rage Against the Machine's guitarist Tom Morello was in Wisconsin recently in support of the government worker unions not having to pay for a small part of their benefits. Sure, teachers get an average pay of over $50,000 a year for 9 months work, plus benefits that ramp up to about $90,000. Sure, they don't have to pay for their health care or pension benefits. But they're fighting against the man, apparently. Even though they are the man, as they are government workers, the very teachers and authorities that Rage Against the Machine continually rails against in their songs.

And here's the basic problem I have with protest professionals and today's faux anarchists. They aren't against power or the system, they're against power and the system they disagree with. They're perfectly willing to reverse their positions to align themselves with the left, even if what they say is completely opposite what they have said recently. The reason for this is that their goals have nothing to do with any overarching principle or objective ideals, but with the ever-changing efforts of "progress" which means rejecting what has been and reaching for something different, even if its the reverse of what you previously fought for.

Those in power cannot be trusted, unless they are in a union. Teachers are idiot propagandists we have to fight, until its time to back them and march with them against a Republican governor. Rage Against the Machine? How about Rage Against Consistency and Logic.
Posted by Christopher R Taylor at 8:43 AM

Oh dear me yes. A long standing integral contradiction of the angsty ararcho-punk edge of popular music. I always got a kick out of putatively "anarchist" rockers who embraced leftist politics, which ordinarily involves centralizing and strengthening state power and then extending that power into the most mundane details of everyday life. When I was a kid, I enjoyed the energy of the music, but even then I knew most of the politically inclined rockers were chuckleheads.

Tangentially it reminds me too of that old saw, "the personal is political". That wasn't a statement of fact so much as of aspiration -- that more and more of people's personal lives should become subject to politics.

Which is precisely the reason you'll not see music going the way of e-publishing. The "stage" is more important.