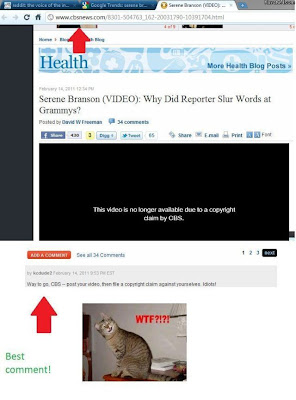 CBS posted a video on YouTube about unfortunate reporter Serene Branson who apparently had stroke while reporting at the Grammys. I hope she's recovering, but here's the deal: they posted that video on their webpage, then apparently complained it was a copyright violation and YouTube took it down. So on the CBS webpage, there was a big black box where the video should have been. On their own webpage, of their own video; that's CBS.com in the screen capture.

Apparently the legal guys at CBS weren't talking to the news guys that day.
Posted by Christopher R Taylor at 10:28 AM