"But I also want to make clear that we -- our thoughts and prayers are with the families of victims in Libya."
-Obama Press Secretary Carney 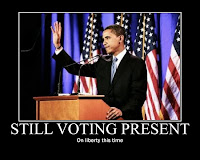 In the last month or so, the Middle East and North Africa have been torn by revolt and unrest as the people of nations long held by tyrants have had enough and want change. This has been driven by a wide variety of factors, such as President Bush's attempts to spread Democracy in the region, hunger brought about by foolish biofuels initiatives, and greater information available to the people in these areas through the internet. All through these revolts, going back as far as last year's failed rebellion in Iran, President Obama has failed to really step up and take a strong stance in favor of the people.

It is true that he's made a few speeches of general well wishing and desire that violence stop and people not get hurt, but there's been no leadership from the president. It isn't that the administration does nothing, and recently press secretary Carney stated that they are weighing all options for how to respond to these events, which of course includes "do nothing." Yet even in this announcement, the administration seems vague and uncertain:

CARNEY: I'm not sure what you mean by "plans."

A strong stance of support for democracy and for the people seeking freedom could have made a difference, and having the United States stand for freedom as a shining city on the hill like Reagan describe it would have helped the perception of the country worldwide.

When Khadaffi, known terrorism monger and brutal tyrant who is shooting and bombing his own people to retain power, faces ouster, President Obama gave a statement of tepid support for the people and never named Khadaffi once. His press secretary claimed that despite so much time going by and so much blood from murdered protesters on the streets of Libya, the president was having scheduling conflicts and couldn't quite fit in a statement about the situation, much less support for the slain seekers of liberty.

So why didn't the president do more? Why is he so reluctant to condemn tyrants and stand for liberty, why can't he bring himself to actually state the name of these men and criticize their treatment of the people? I can't read President Obama's mind, and he's never sat down and explained it, but I think I know based on his other statements, background, and ideology.
The first reason is that President Obama believes that America is not and should not be a world leader. As an academic leftist, he believes that it is arrogant of America to stand up and try to show the world what things should and could be like, and that America is no better than any other nation, perhaps worse. If America is the shining light on the hill, that means other nations are not, and this is unacceptable to the multiculturalist and cultural relativist.

Second, President Obama is no leader. He's simply not able and skilled at standing up and taking a position of leadership to guide others and show the way. His preferred style is to motivate others to do the job instead, to manipulate and use others to accomplish goals, and taking a clear, bold stance of leadership is simply not a part of the man. Unable to manipulate and use people overseas, that means he's incapable of doing anything but make a speech.

Third, President Obama is a politician foremost, and that means he wants to benefit from good things but not suffer when they go bad. That means not taking a risk, and standing up publicly and boldly for liberty is a risk. If it fails, he looks like he failed; people might, and probably would, associate his attempt to lead and encourage with success or failure. So he gives tepid support and thus cannot be associated with failure, but can claim his speeches brought about change (or, more properly, his supporters and staff can).

Fourth and most significantly is his basic foreign policy position. President Obama believes that the reason Muslims and most of the Middle East are so very upset at America and burn flags, shout hatred, and even attack the US through terrorism is because of our actions. Had the US not interfered in the area, had not upset the Muslim population, and had not taken actions that upset them, well they'd be fine with us, even friendly; so goes the theory at least.

So President Obama doesn't want to do anything to rile up the Middle East, he doesn't want to give the appearance of interfering with the people and especially leaders there. If we can just stop meddling and causing trouble there - oppressing the minority "other" in these lands, the academics say - then eventually they'll stop hating us and we can all get along and sing Kum Ba Ya in a group hug.

So that's what we end up with: a leftist president in the leading nation on earth, the world's only real superpower and bastion of liberty, standing back and making minor statements barely supporting desperate crowds seeking basic human rights and liberties which the left claims to cherish and defend above all else.

*UPDATE: I forgot one major contributing factor to the Obama administration's slow and tepid response to middle east turmoil. President Obama is one of the most egotistical, arrogant men on the planet, and for him nearly every single thing that happens is about him. Remember during the Deepwater Horizon oil leak in the Gulf of Mexico, when he complained that this was interfering with his agenda? That's what these events do; they get in the way of what he really wants to be doing, they interfere with his carefully planned sequence of government activity.
Posted by Christopher R Taylor at 9:45 AM

Seems like Obama's hope of a second time are hanging by a thread.